California birding has been one of our favorite annual traditions over the four years we’ve lived out West. Last year we spent two weeks driving nearly the entire length and breadth of the state, and it was one of the best things we’ve ever done. More typically, we might spend a day exploring Lava Beds National Monument in Siskiyou County, one of our must-visit destinations whenever we’re in the Klamath-area for the Winter Wings Festival. We’ve written about Lava Beds in previous posts (here and here), and we’ve driven through Lower Klamath National Wildlife Refuge, which is home to massive numbers of wintering waterfowl in February, when we’ve made it down in the past.


With so much on our plate this summer, we were worried we might not have the chance to visit at all this year. You can guess our surprise and our excitement when we were offered the opportunity to take an expenses-paid birding trip to Siskiyou County, if we would write about our experiences here and for Discover Siskiyou. We were happy to oblige! So you’ll see a bit more of the non-nature aspects of our trip than we might otherwise share here, but the area really does have a lot to recommend, and we’re glad we can share it with you. 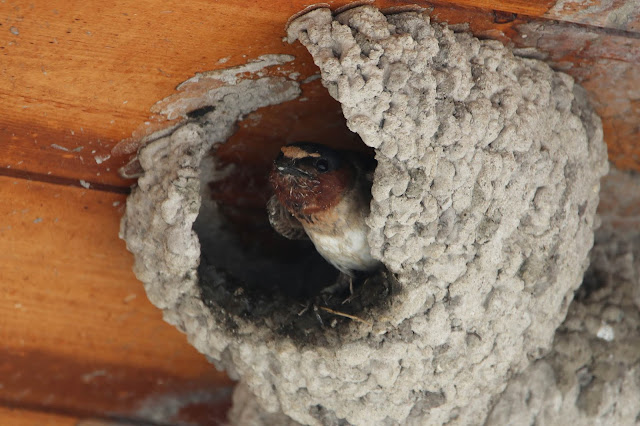 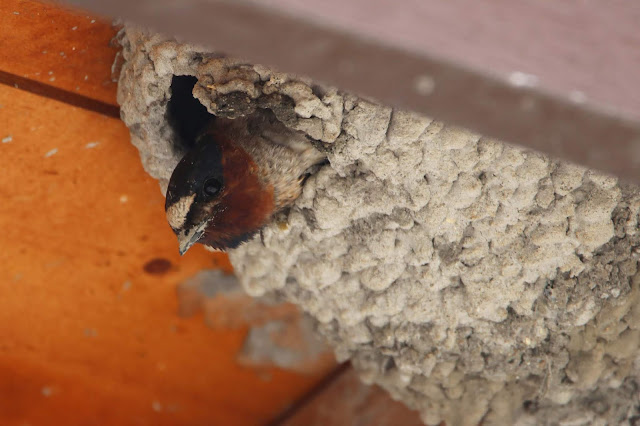 Since we’ve only visited Siskiyou in winter, this was the first time we’ve come around breeding time. We were excited to see what other great birds we could find. We planned a V-formation route down I-5 down to Lake Shasta, and then up US 97, and then east toward the Lower Klamath Basin and Tule Lake areas. We left nice and early to arrive just north of Yreka by mid-morning. We were a bit bummed that our first planned stop at the Randolph E. Collier rest area was closed for construction. However, across the Klamath River from the rest area was a place we could park and locate some birds. With our short stop, we picked up a singing Lazuli Bunting, some chatty Bullock’s Orioles, and a Lewis’s Woodpecker! This was the only stop on our route where we thought we might get one, so we felt lucky that we were able to get one from across the street.


We made our way to the Shasta Valley Wildlife Area, and another lucky spot was finding two Golden Eagles, a juvenile and an adult whose beautiful golden head was as clear as day as it soared in the sunlight and landed on a rocky hill. We had hoped to get Ash-throated Flycatcher, Great-tailed Grackle, Rock Wren, and Lark Sparrow, but were still happy to find Western Kingbird, Black-billed Magpie, and Yellow-headed Blackbird, as well as a lifer butterfly and some friendly lizards! As it was mid-day by then and the birds were quiet (and it was getting quite hot), we cooled down with a couple of beers at Etna Brewery & Taphouse and a hearty lunch.


We pushed through the heat and forged ahead to Lake Shastina. We were delighted to find small islands dotting the lake with colonies of nesting Double-Crested Cormorants and Great Blue Herons. There were also plenty of American White Pelicans and Western Grebes. California Gulls (appropriate for where we were!), Ringed-Billed Gulls, and Forster’s Terns fed on the bountiful fish in the lake. 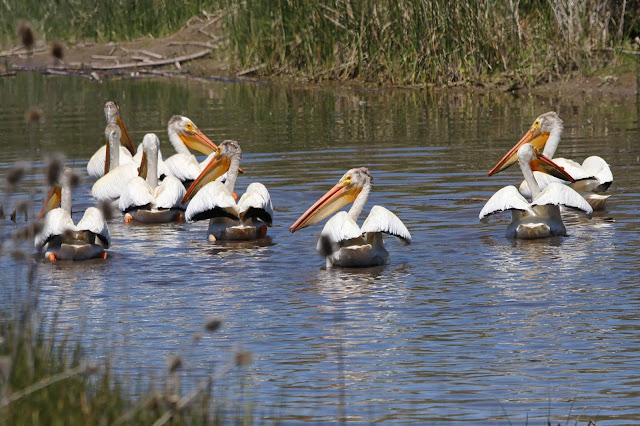 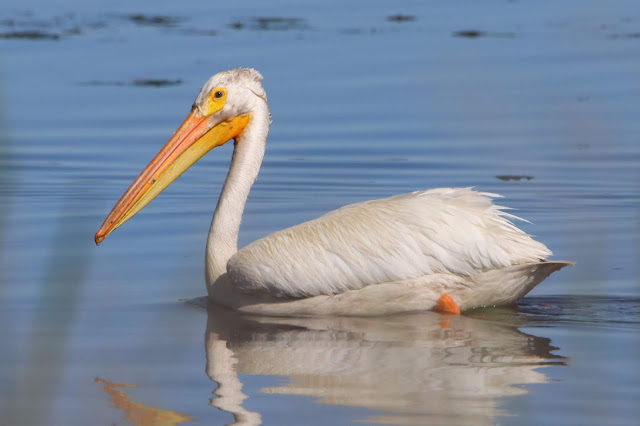 We headed to our lodging for the evening at the Mount Shasta Resort. Our lovely chalet was right off of Lake Siskiyou, and a nearby trail led into a coniferous wooded area. We took a little evening stroll before having a delicious meal at Café Madelena in the nearby town of Dunsmuir. The next morning was another early rise to walk the trail to see who would be singing the dawn chorus. We picked up Mountain Chickadee, Cassin’s Vireo, and an obliging, singing MacGillivray’s Warbler. We will definitely want to come back to this area and explore more, but we were on a mission!

After a scrumptious breakfast at Lilys Restaurant in the city of Mt. Shasta (and grabbing some BLTs and zucchini bread to go from Seven Suns Coffee and Café since there weren’t going to be any eateries along most of 97), we were off to the Grass Lake Rest Area along US 97. But to our surprise, it was also closed for repairs! We did not let that deter us as we found a pullout just up the road and used our scope to pick out Black Terns, which are known to be reliable at that spot. And since the pullout was actually at a trailhead into the Klamath National Forest, we took some time to poke around, and came out fruitful! We had a singing Western Tanager, Chipping Sparrows, a couple of Cassin’s Finches looking for nesting material, and an adorable Gray Flycatcher. 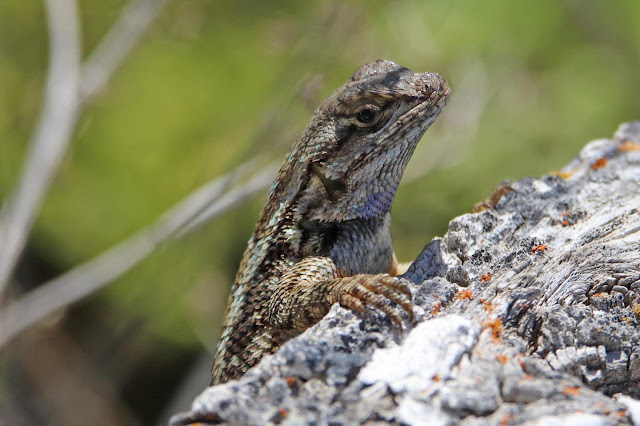 Next, we headed to Butte Valley Wildlife Area where raptors and shorebirds abound. A Bald Eagle cried in anguish as a pair of Red-Tailed Hawks continually harassed it. The auto tour ran alongside Meiss Lake, which held dozens of American Avocets, several Wilson’s Phalaropes, Black-necked Stilts, and Willets. The songs of LOTS of Marsh Wrens filled the reeds, with the occasional gulpy booms of American Bitterns, and the comical whinnies of Soras. 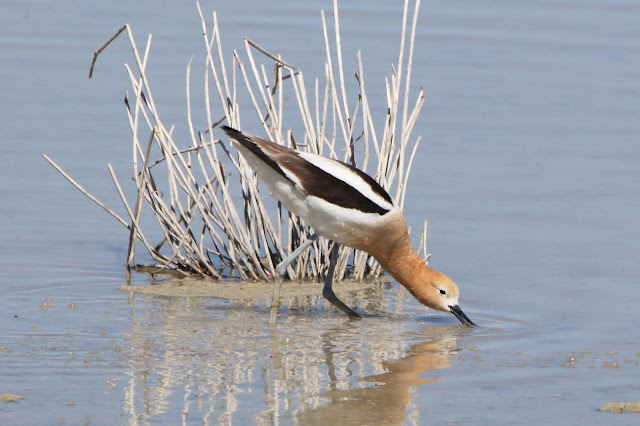 After one quick pause for paletas (Mexican popsicles) in Dorris to beat the heat, it was time to start heading to our next sleeping quarters for the night, but not without a few pit stops along SR 161. The lakes along this road are great for ducks and other water birds. We finally got our first White-Faced Ibis for the trip. As we pulled over at Sheepy Lake, part of the Lower Klamath National Wildlife Refuge, there seemed to be a “highway” where the Ibis would fly across the border between Oregon and California. Squawking Caspian Terns and Forster’s Terns also flew back and forth. 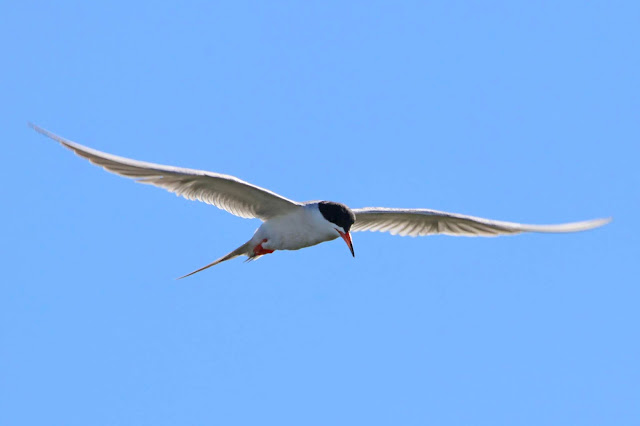 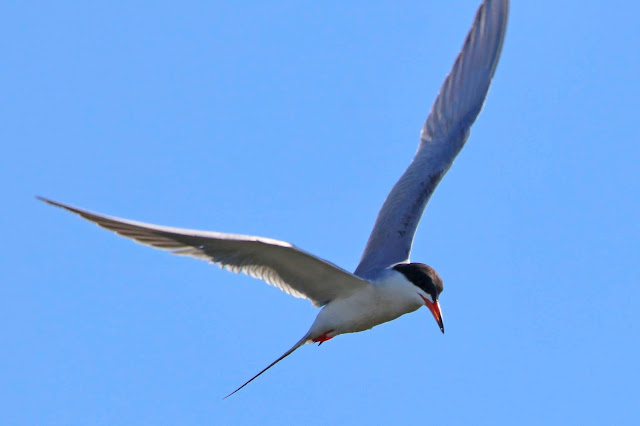 We pulled over to a tiny hotspot (which we did not know was a hot spot at the time) after spotting some large unidentified bird frantically flying out of a tree and getting harassed by blackbirds. Lo and behold, it was a Great Horned Owl! The blackbirds forced him out and back from that tree a couple of times before he was able to settle down long enough for us to get a sneak peak at him from the car. A tasty meal of Chile Colorado and a large horchata at Señor Tequila capped off another successful day. 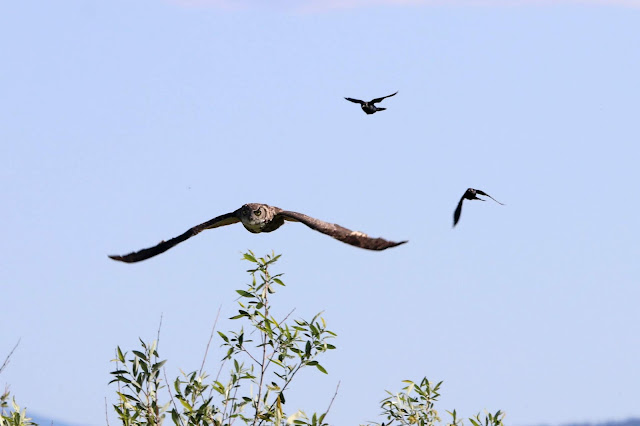 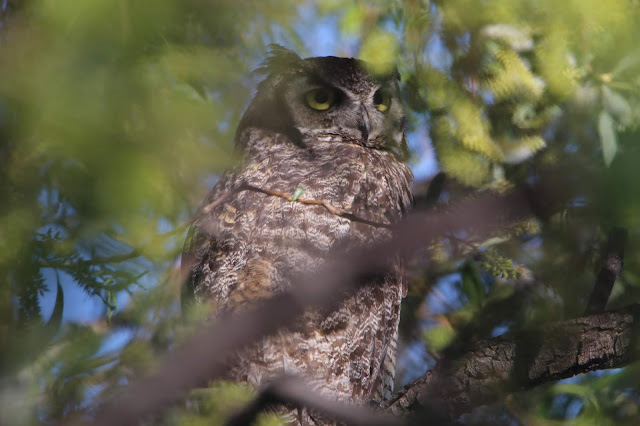 After a night in our basic lodging at Winema Lodge conveniently located near Tule Lake, we rolled out of bed and headed straight for the auto route around Tule Lake. We soon discovered that we were joined by BILLIONS if not trillions (in all seriousness) of midges! Just see for yourself in the video. Along the route, we could see columns that were just dense clouds of midges. Luckily, they didn’t bite, but the mosquito interlopers did. One thing I love about auto routes is that our car is a mobile blind. We were able to get great looks at Black-Crowned Night Herons, the one and only Snowy Egret we saw, a nicely perched bald Eagle, and hundreds of raucousy Tricolored Blackbirds.

We only had our first Tricolored Blackbirds earlier this year – about half a dozen on a back country road near us. California contains ~95% of the breeding population of these endangered birds, so seeing them in numbers like these was such a treat! 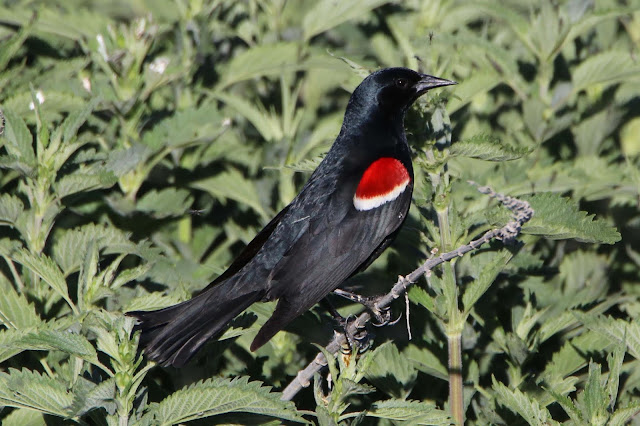 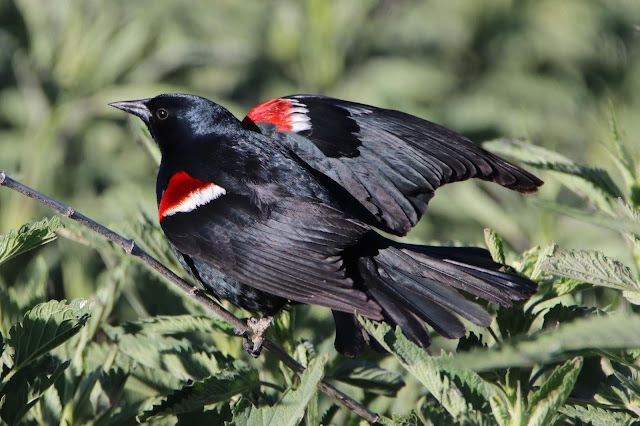 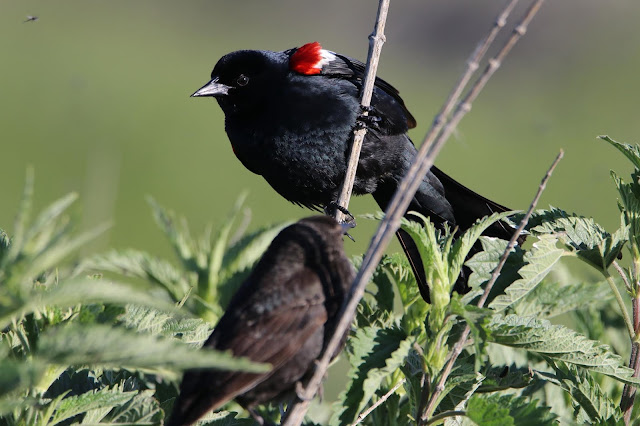 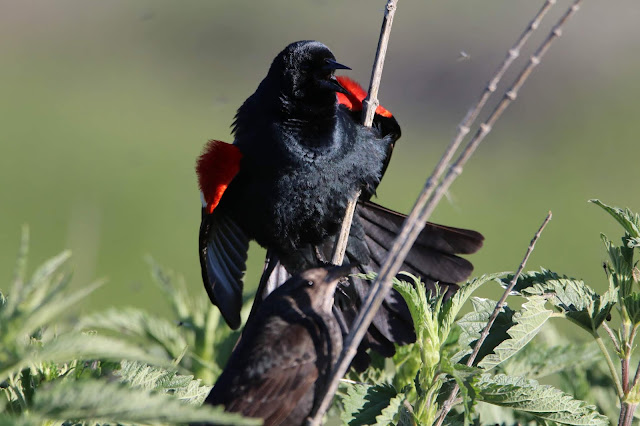 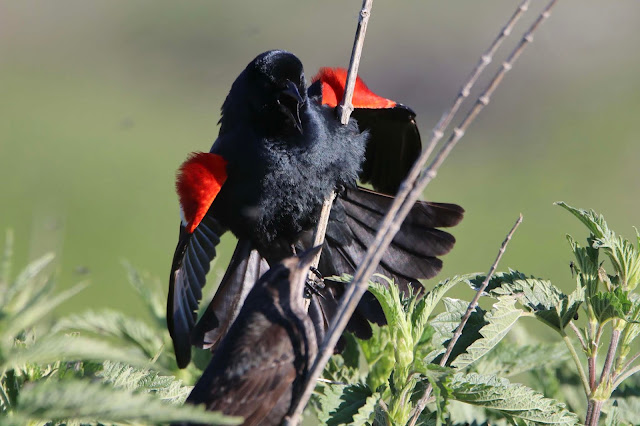 We ended our big Siskiyou County adventure with a big and yummy buffet brunch at Captain Jack’s Stronghold. Like that buffet, we had such a great variety of experiences in this relatively short trip. It was such a fantastic trip, and we know we’ll definitely be back. We are so glad that we were provided this opportunity to really explore Siskiyou County and all of the wonderful wildlife, birds, and variety of habitats it has to offer. We ended up with 110 species of birds, eleven types of mammals, a number of different butterflies, damselflies, dragonflies, and lizards! Add the tasty food and drinks, and it is an all around great travel destination for any birder or nature lover. Thank you to Discover Siskiyou for a tremendously fun weekend, and don't forget to visit www.discoversiskiyou.com to start planning your own birding adventure! 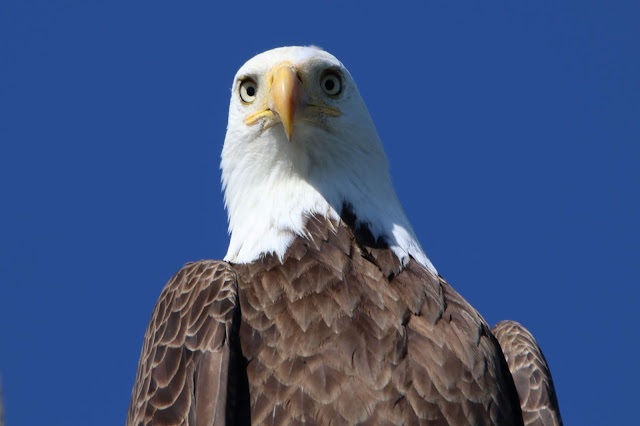 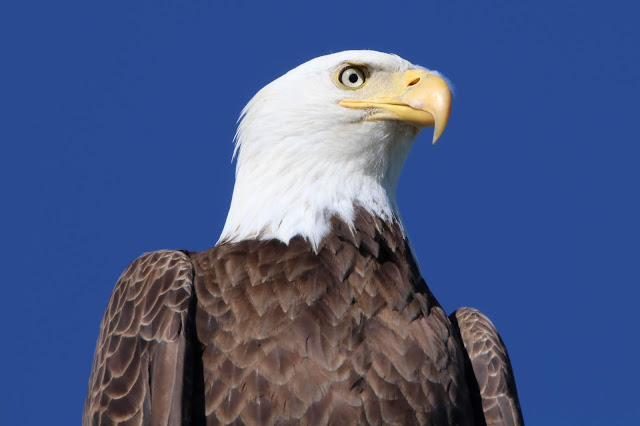 Posted by Maureen Leong-Kee at 9:34 PM