Review: Lost Among the Birds

In 2013, Neil Hayward did the improbable and broke Sandy Komito's longstanding Big Year record, tallying 749 bird species in the ABA area. It was a year of dramatic and memorable sightings, like the Rufous-necked Wood-rail at Bosque del Apache, which Hayward made even more dramatic and memorable when it became clear his "accidental" Big Year attempt might actually pay off. 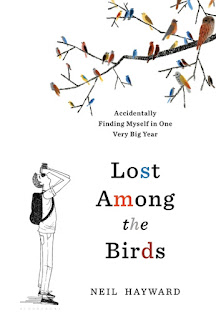 Given the vast distances, astronomical expenses, and huge stretches of time involved, you might expect that anyone hoping to make history along these lines would start planning well in advance of January 1. Part of what makes Hayward's story unique and compelling is that he hadn't begun 2013 with a Big Year in mind; in fact, several months had already passed before he would even admit to himself that he was pursuing any goal at all. In his new memoir, Lost Among the Birds, readers can follow along as the idea slowly takes shape, and the idea becomes reality.

As much as this is the story of Neil Hayward's Big Year, it's also the story of his trying to find himself. By 2013 he had quit his job, was reeling from past relationship woes, and about to turn 40. While I was expecting and hoping for a real-life adventure story revolving around birds, the birds are interspersed with riffs about how his commitment fears weigh on his present relationship, how his depression colors his worldview before and after medication, and the need to get his life in order, generally. Personally, I found these bits, particularly about his relationship worries, tiresome. As Hayward himself admits, he hates "pretending to be interested" in the minutiae of other people's lives; I won't pretend these parts were any more enjoyable for me to get through.

But the birding tales are are very good -- exactly the kind you want from a book like this. Certain difficult, highly localized species like Colima Warbler, or Five-striped Sparrow, are birds that most American birders dream about, but are unlikely to see themselves. Hayward traveled everywhere, recounting how he traveled there, what steps he took to locate the bird, and the experience of being in the bird's presence. No less enjoyable is seeing the camaraderie between Hayward and the other birders who play a big part in his Big Year, as they share in their pursuit of each new rarity, often in inaccessible locales, with primitive conditions. Following along with him on these adventures is vicarious birding at its best.

If you've read other Big Year accounts, like Kenn Kauffman's Kingbird Highway, or Mark Obmascik's The Big Year, you already have an idea of how extreme an undertaking this was. Hayward repeatedly criss-crosses the country, often hopping on a return flight soon after landing (you can see his itinerary here). It's hardly a sensible thing to do, what with the ecological footprint (which can't be overstated), constant exhaustion, discomfort, and expense. It's a grueling endeavor, however you look at it, but not without it's joys. Hayward is honest about it all, and by the end, still manages to see birds as more than just a tick in a checkbox. Most of us will never attempt a Big Year; Lost Among the Birds will make you glad that Neil Hayward did.