One of the reasons we moved out West was to see different birds. Granted, some of these are just Western analogs of birds that we found regularly in Georgia or Florida: Black Oystercatcher, instead of American Oystercatcher; or Western Wood-pewee, instead of Eastern Wood-pewee. But the ones we get most excited about are the birds that are make their living in ways that are very different to the what we’re used to (birds that nest in deserts and along rocky shorelines come to mind). And more than any other bird, the one I just wouldn’t shut up about from the moment we arrived in Oregon was our only aquatic songbird: the American Dipper. 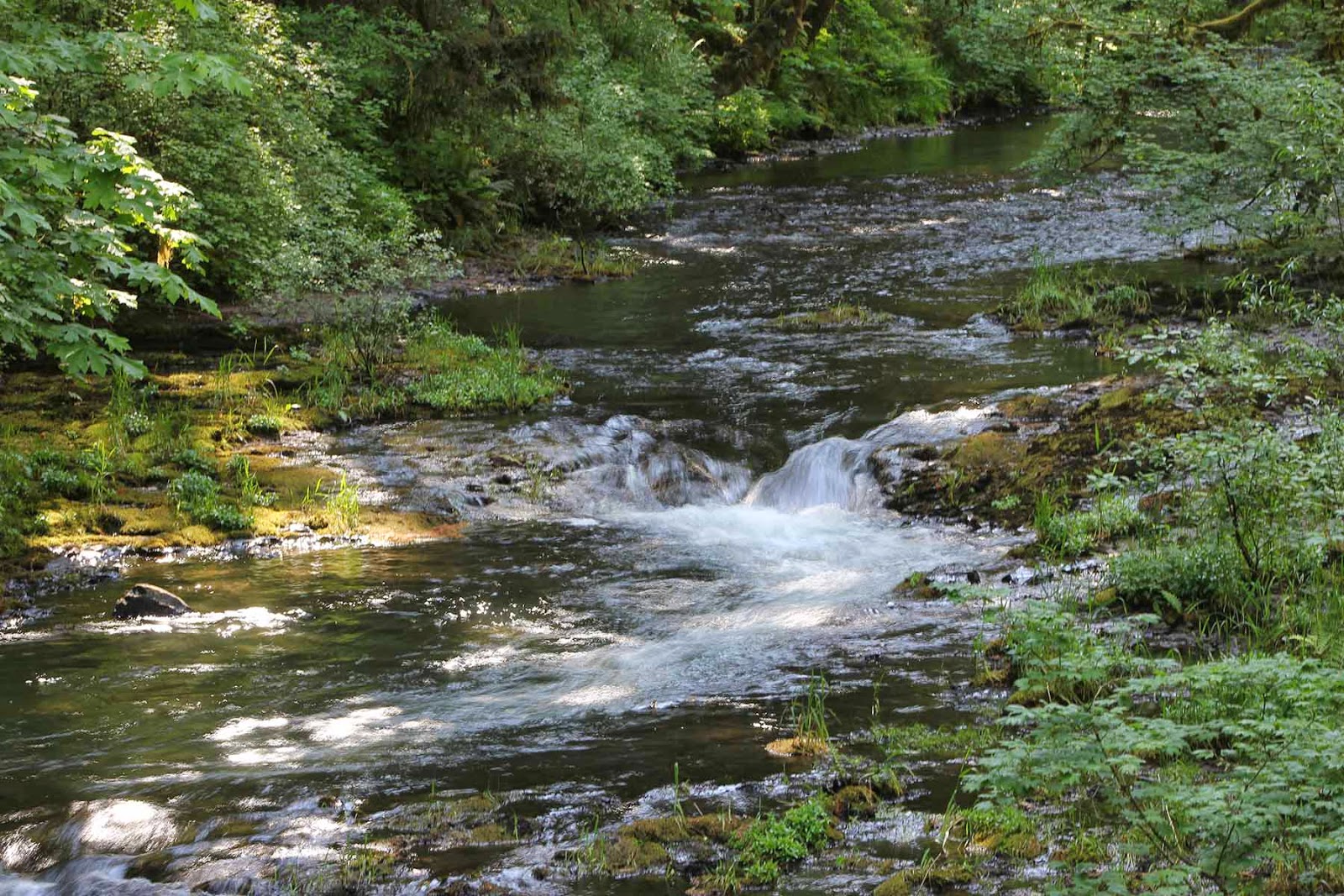 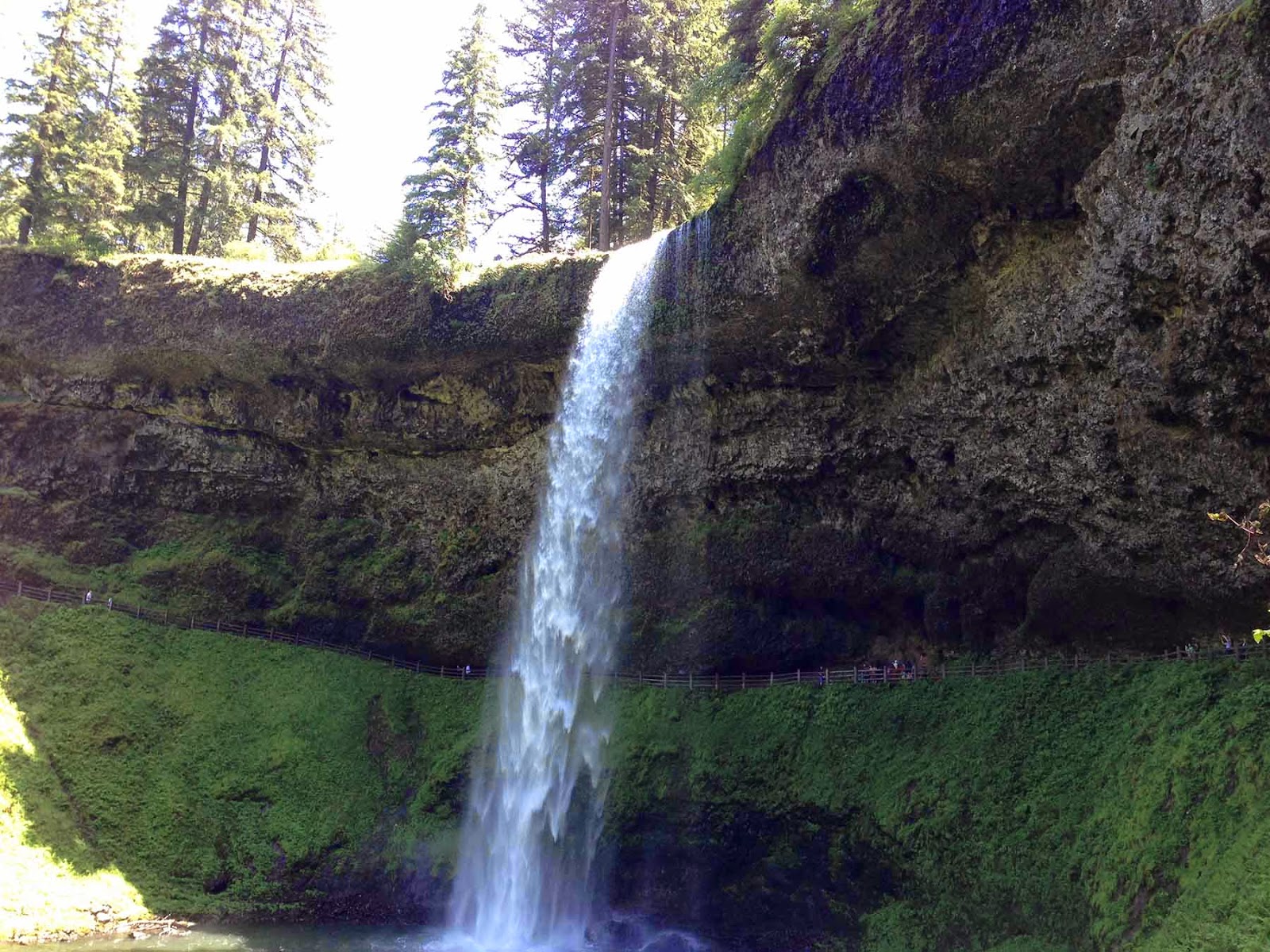 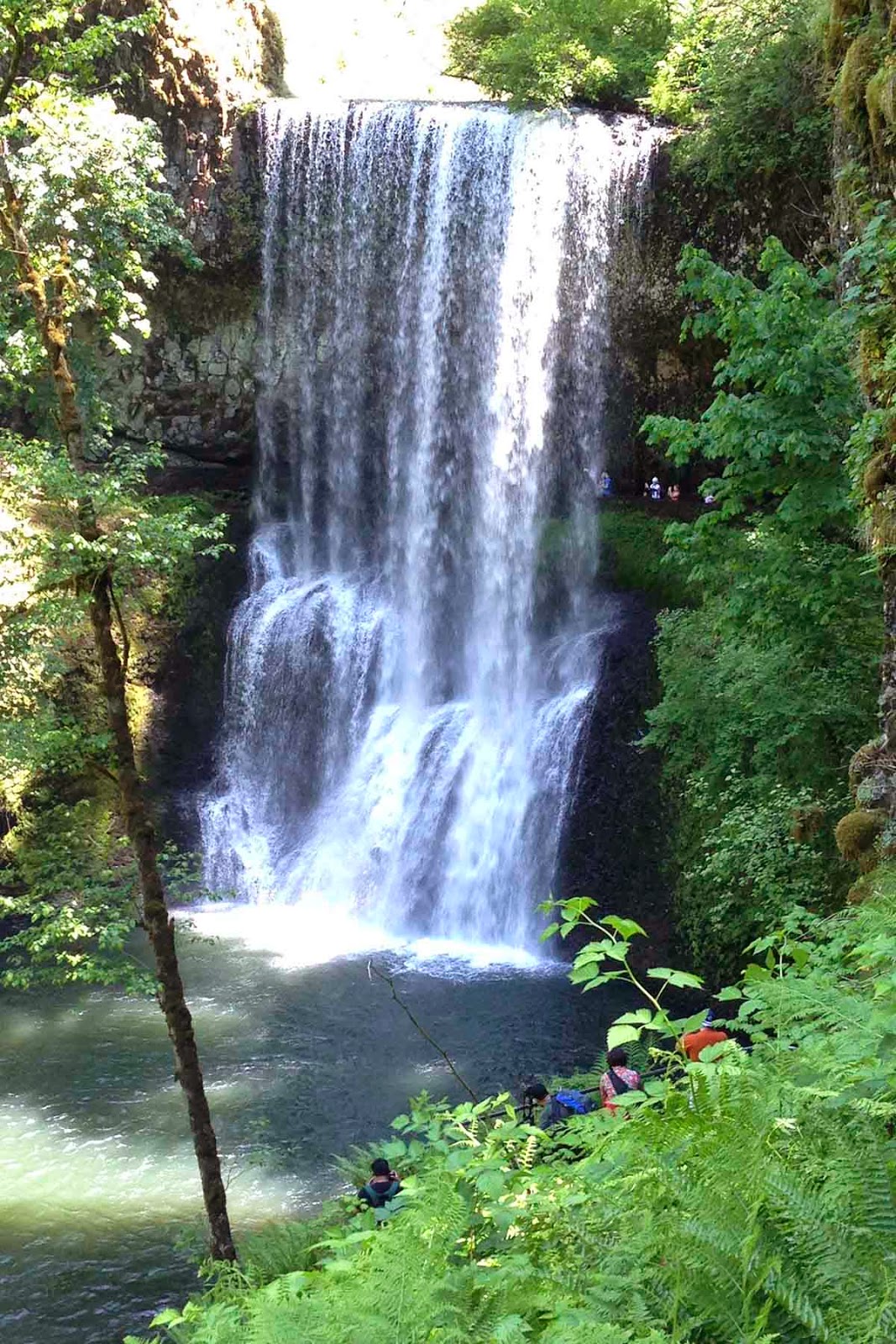 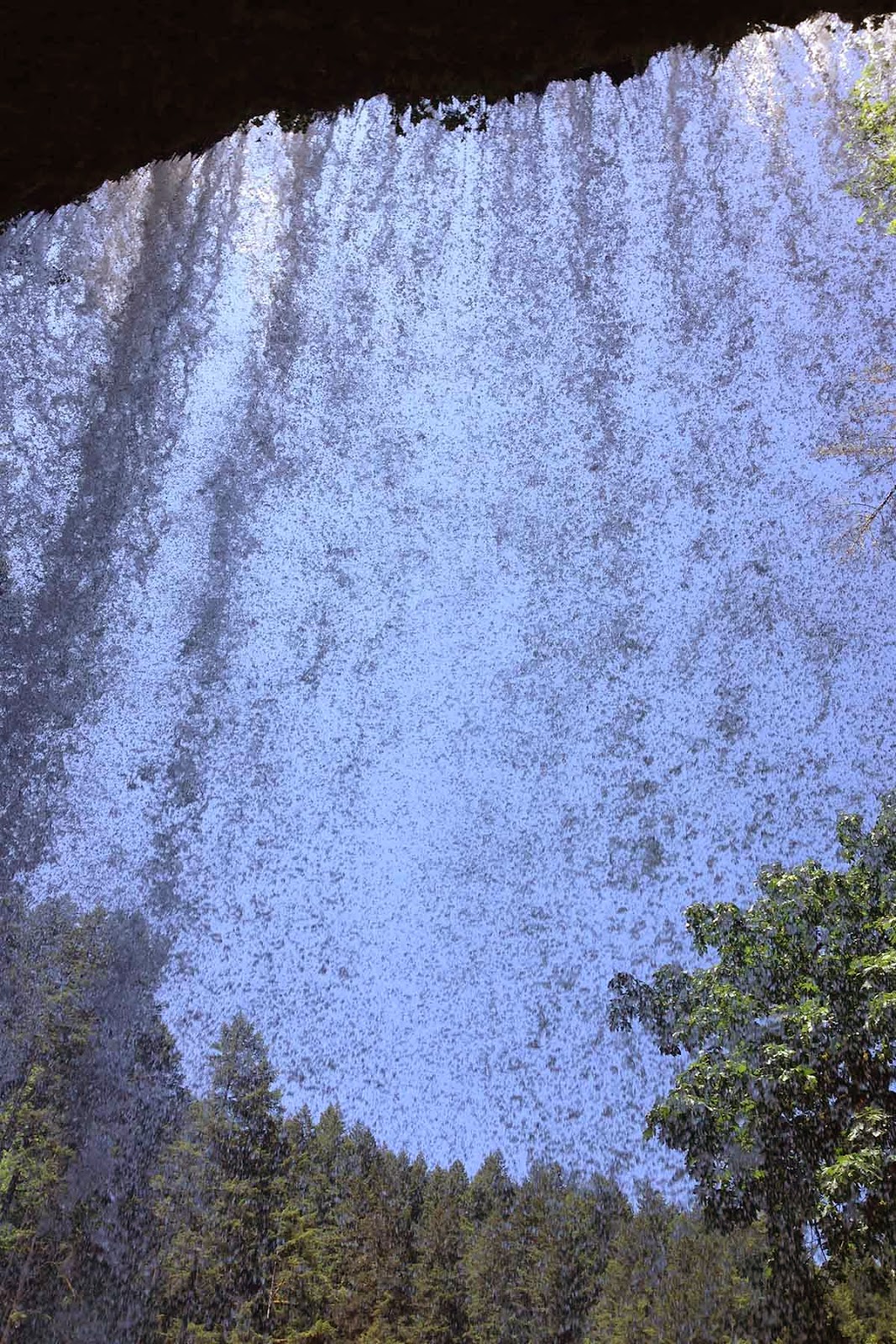 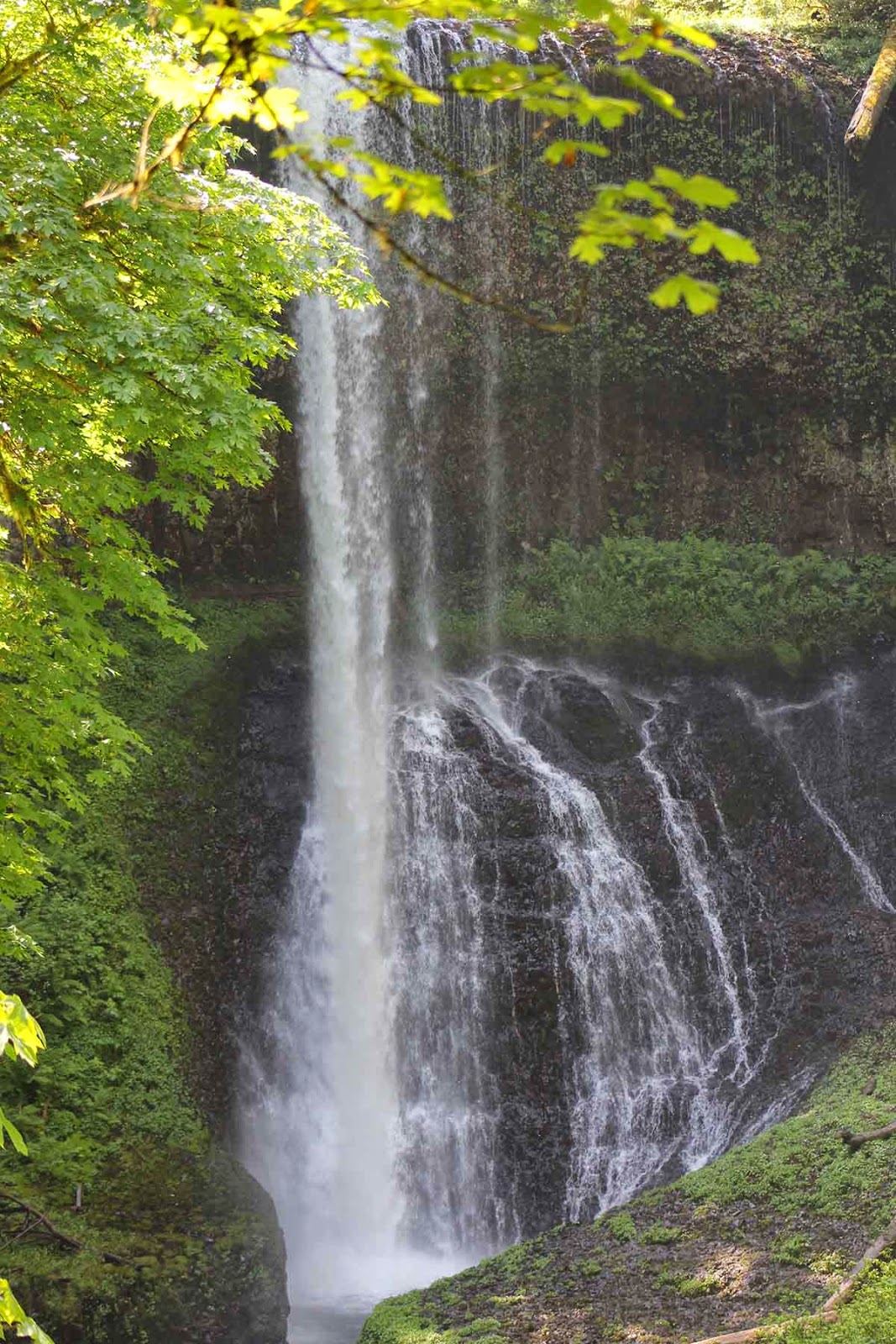 Dippers nest behind or near waterfalls, using the spray to keep their mossy nests moist and verdant. Silver Falls State Park seemed like our best bet nearby for finding the our target bird, and so, cavalierly defying TLC’s sage and timeless advice, we went chasing American Dippers. The park itself is a temperate rainforest in the foothills of the Cascades (how do we only live half an hour from rainforest?!). It’s best known for it’s “Trail of Ten Falls”, a 9-mile loop that takes you past all manner of waterfall, ranging between from between 27 ft. and 178 ft. We managed to knock four miles off our hike by cutting out two of the falls, but five miles is plenty far to lug a spotting scope, let me tell you. 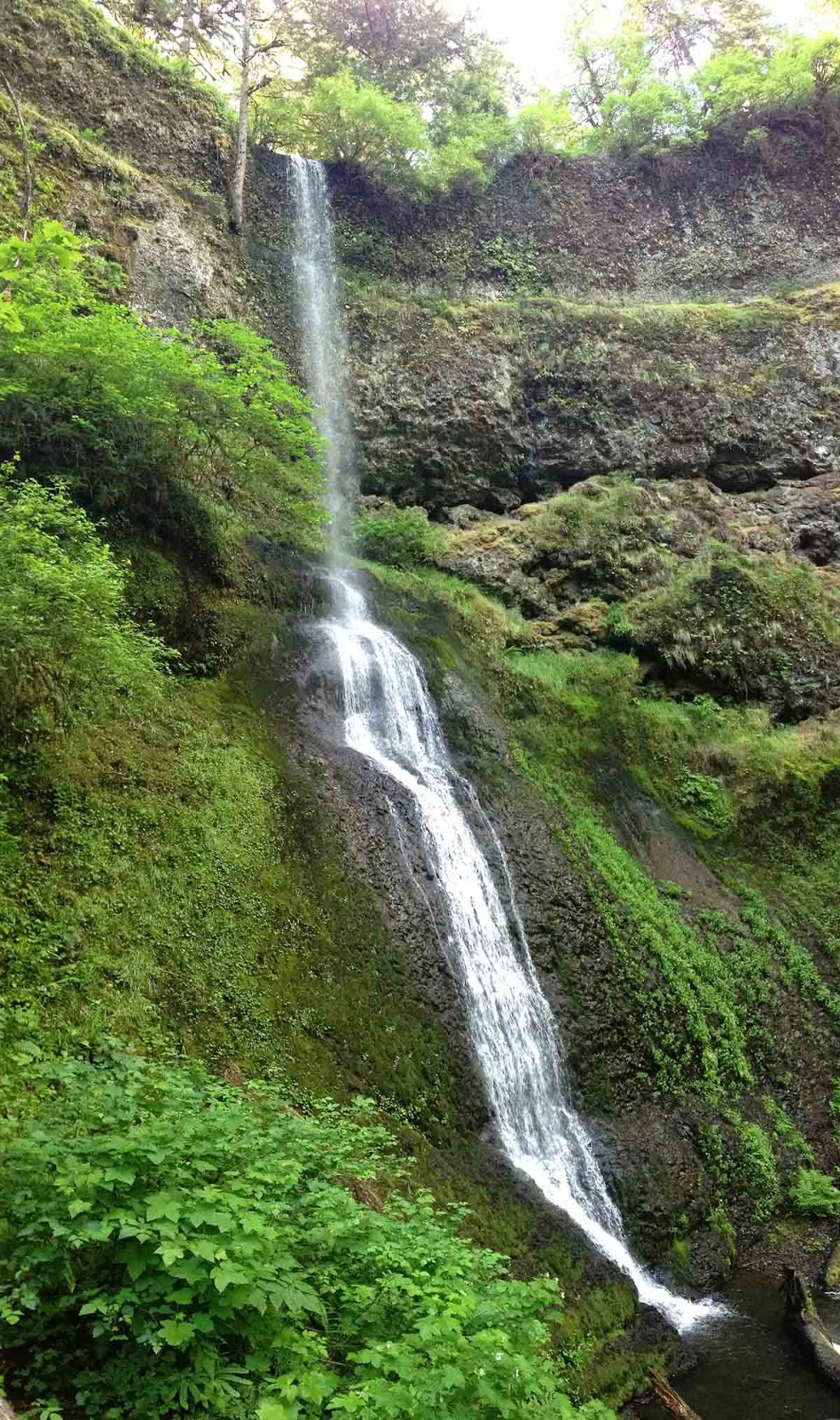 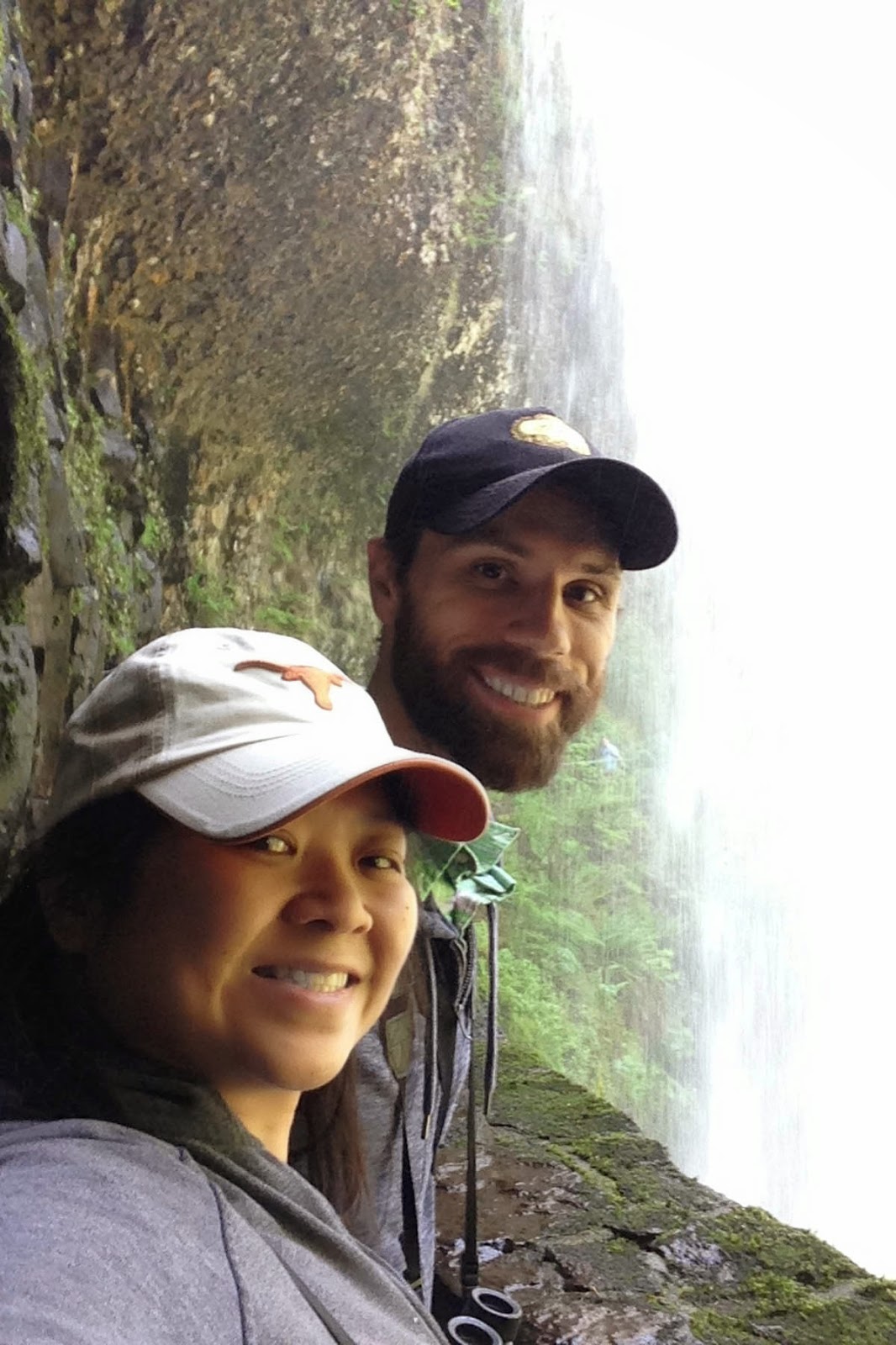 Our first good bird of the day was from an observation lookout on the road in: two Common Ravens circled us overhead, close side by side one another. Other than a fleeting glimpse of a raven on our drive up Oregon two months ago, these were our first, and our first opportunity to really study and enjoy them. I’ll admit that I may have jumped the gun once or twice before this, when I let myself believe that a distant crow might — just might — have been a raven. Now we could clearly make out their wedge-shaped tails, and hear the reverberation of their hollow, throaty croaks. Not to mention that we could finally fully appreciate just how huge they really are. 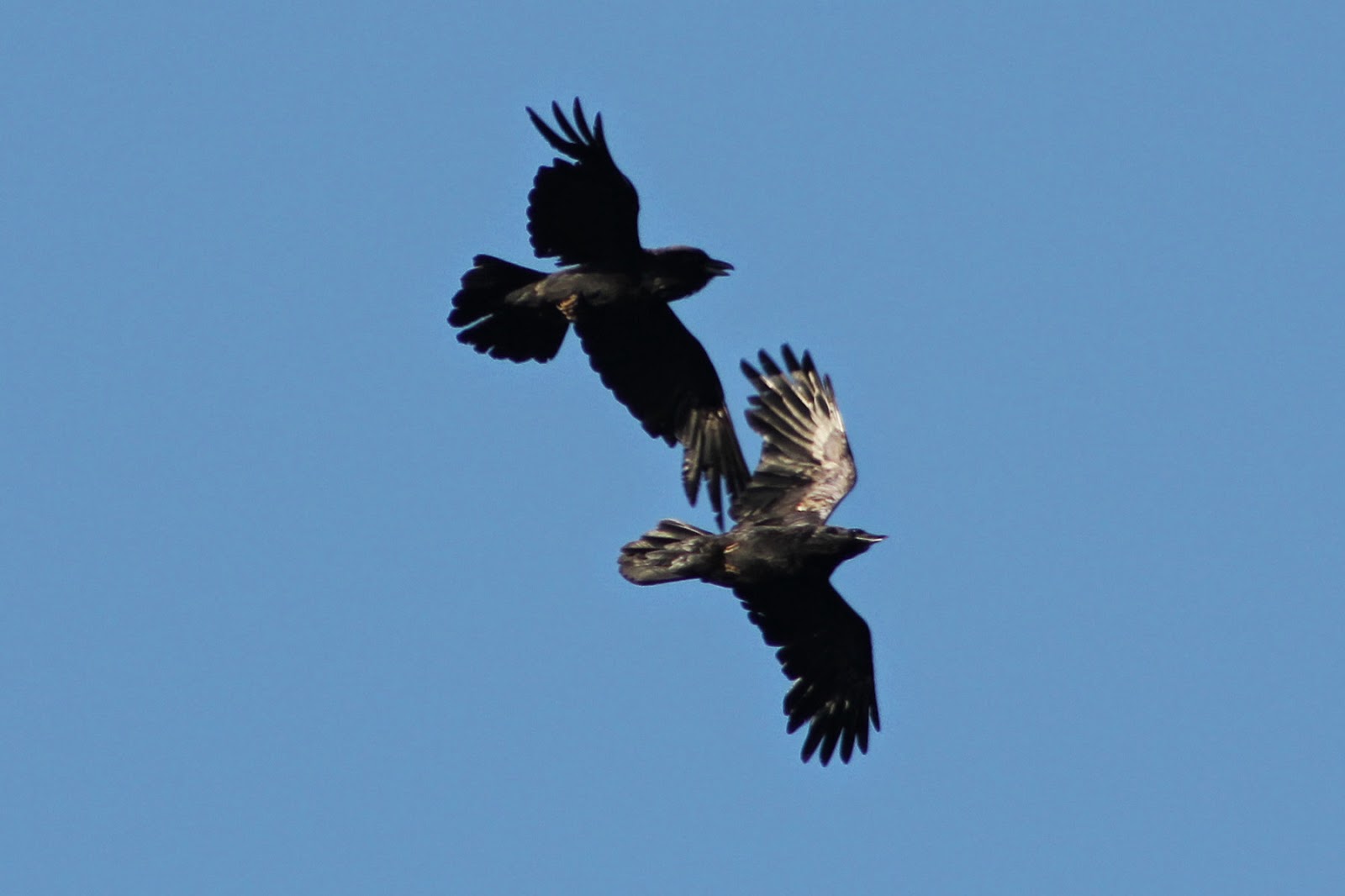 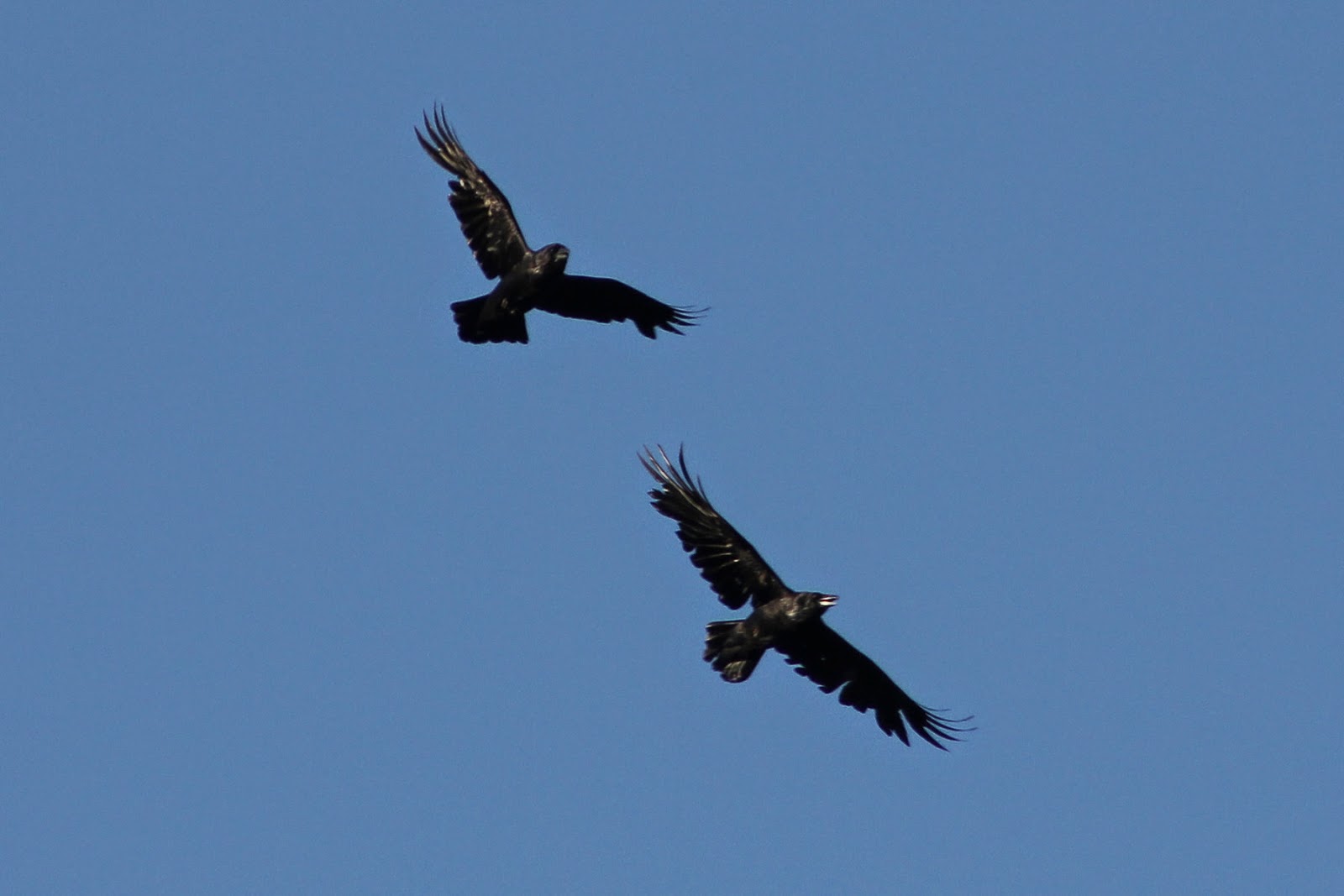 Once we got inside the park grounds, we were delighted to see a handsome Violet-green Swallow resting atop the bathroom roof. Of all the swallows species out here, this one seems to be the one we see perched the least often. Then again, maybe that’s only been our perception because it’s a new swallow for us, and we’ve been anxious to get a good look at it. In any case, this was our chance, and we happily seized it. 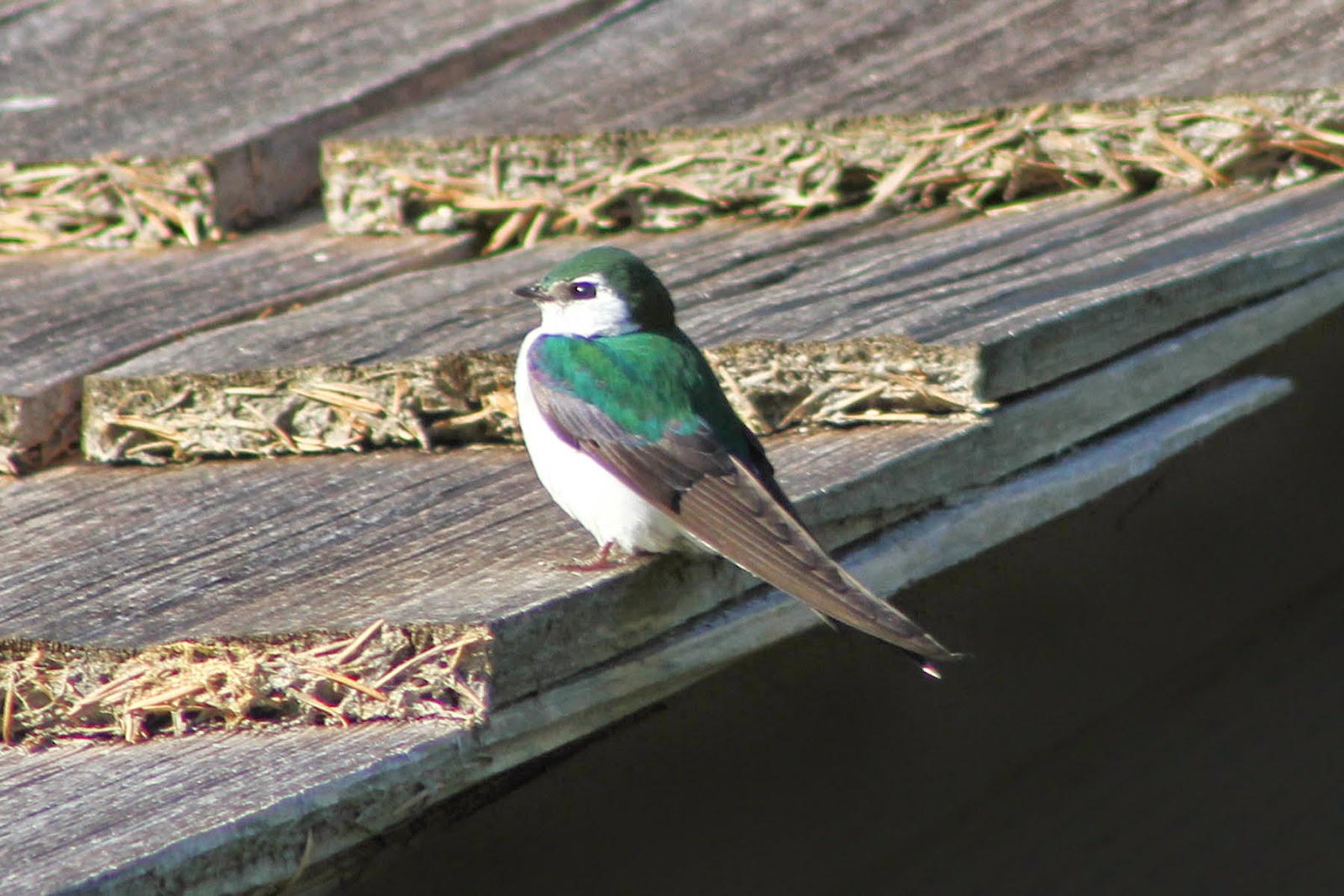 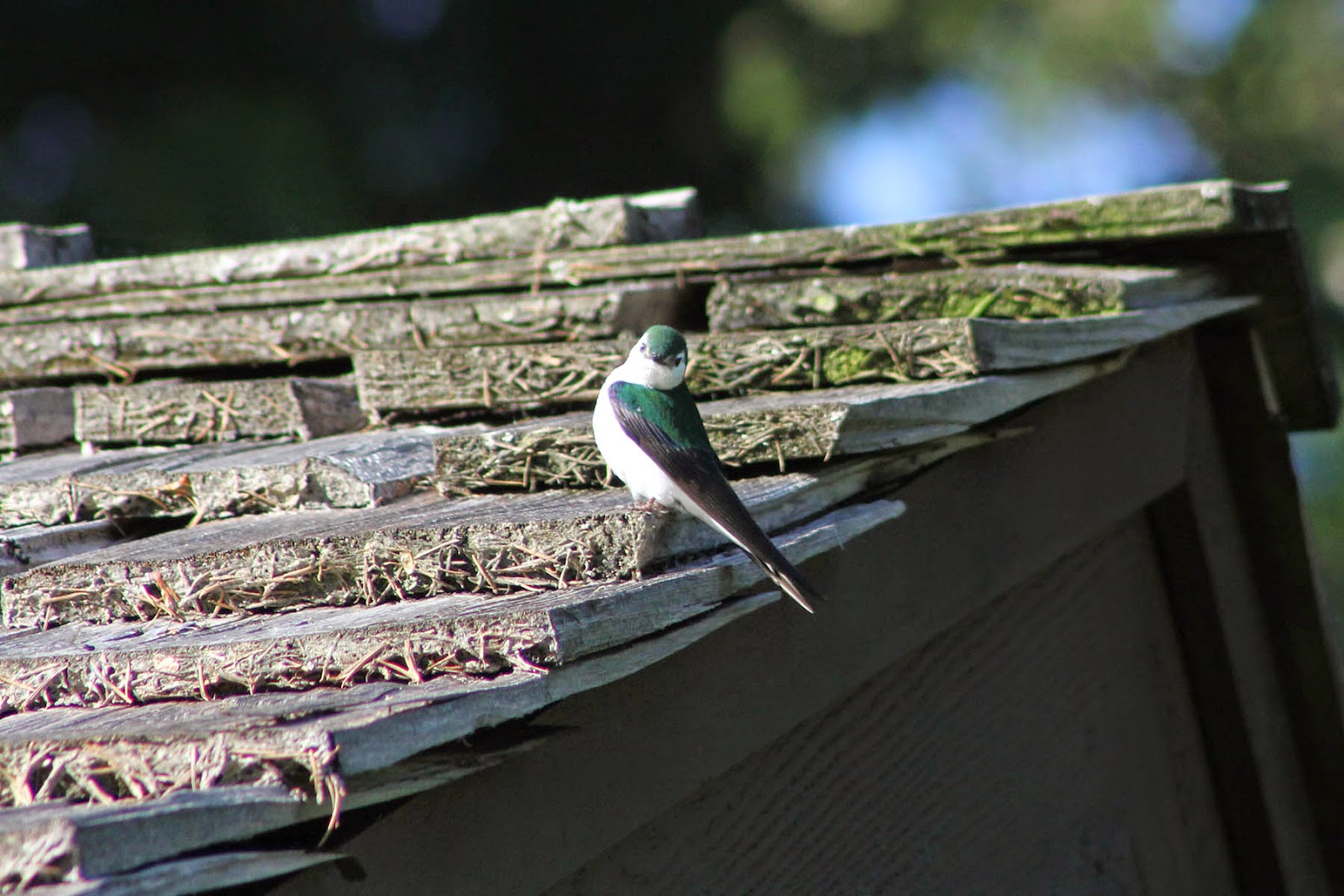 After we finally started along the Trail of Ten Falls, we heard Pacific Wrens singing everywhere. The entire day they gave the American Robins stiff competition for most numerous bird, but they rarely popped up for us to see them well. A strong contingent of Wilson’s Warblers was out, too, and mostly concentrated around a single bridge, flying circles all around us while somehow managing to keep their little toupee’s securely fastened. 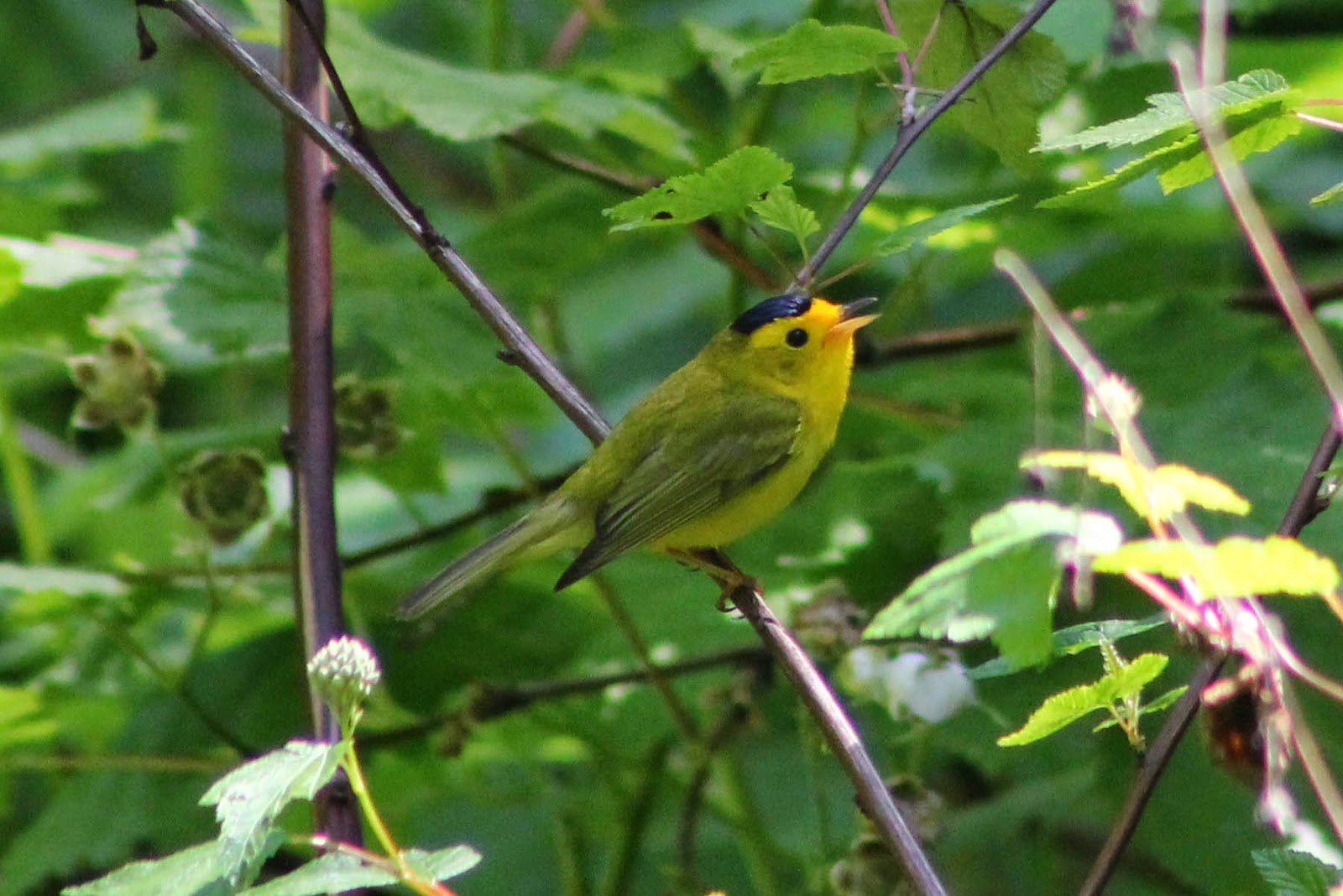 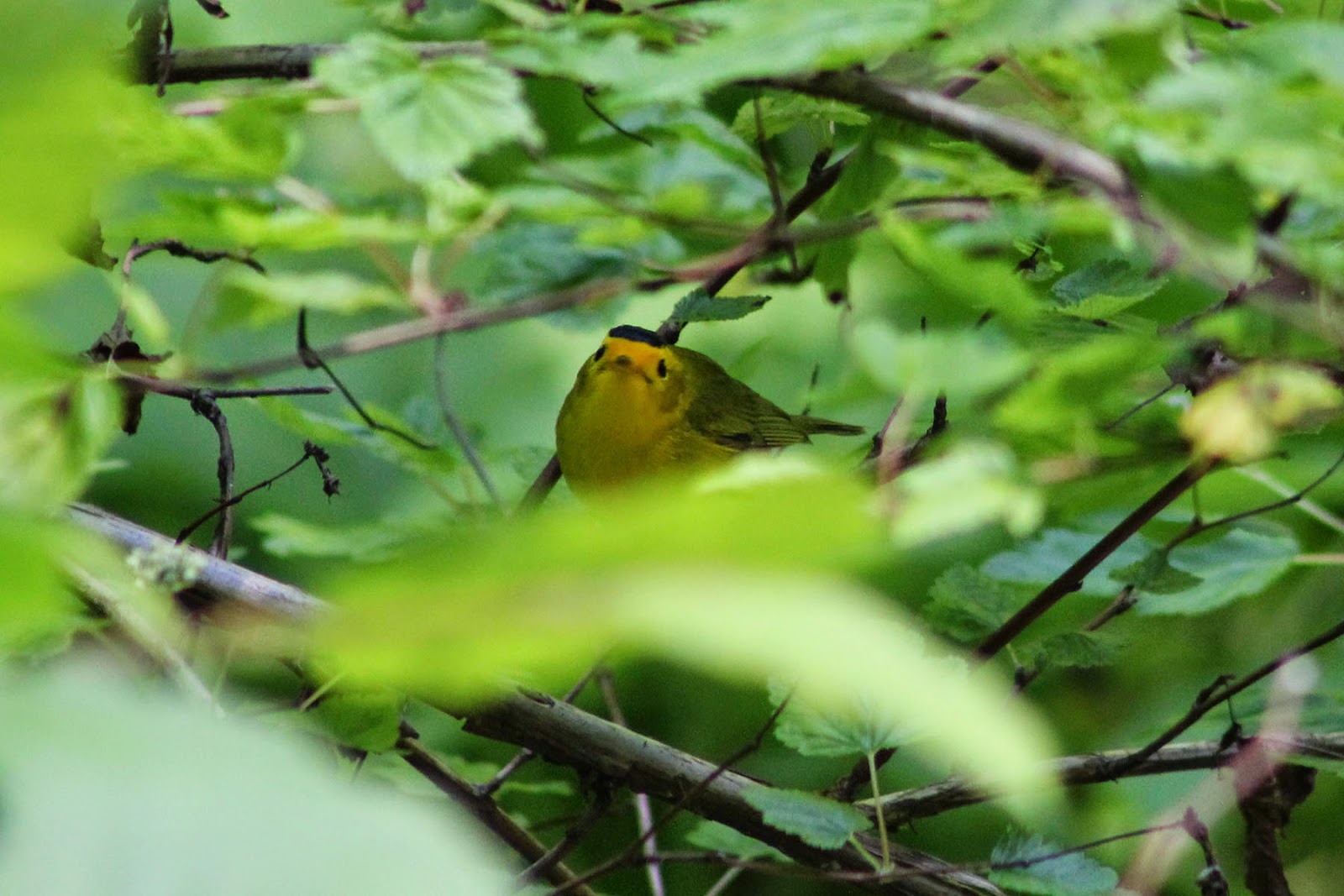 Non-birds included an adorable Townsend’s Chipmunk. In New York there’s only one species (Eastern Chipmunk), and so growing up I always just thought chipmunks were chipmunks, but in the West there is a huge diversity of species, and in all of North America there are as many as two dozen altogether. 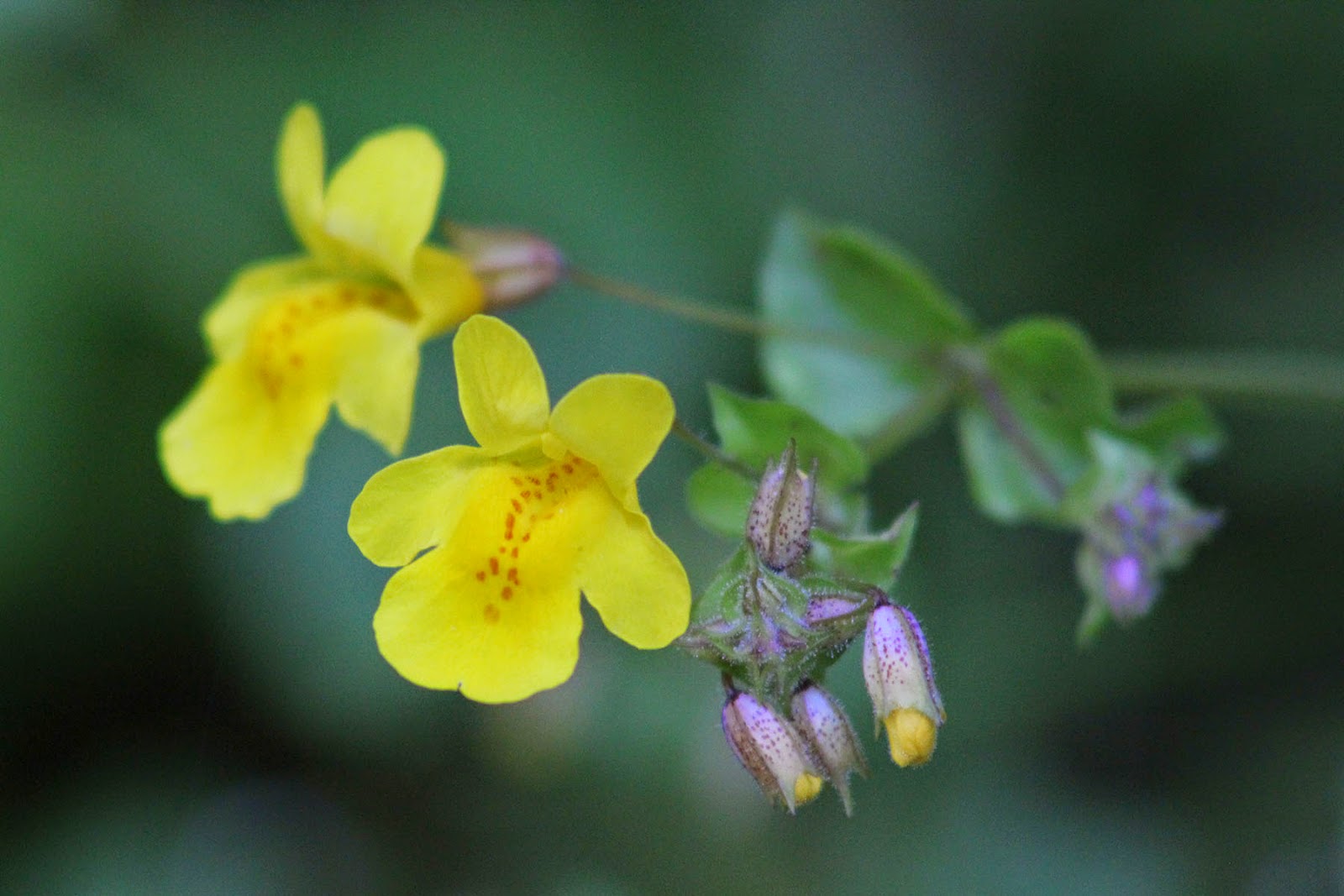 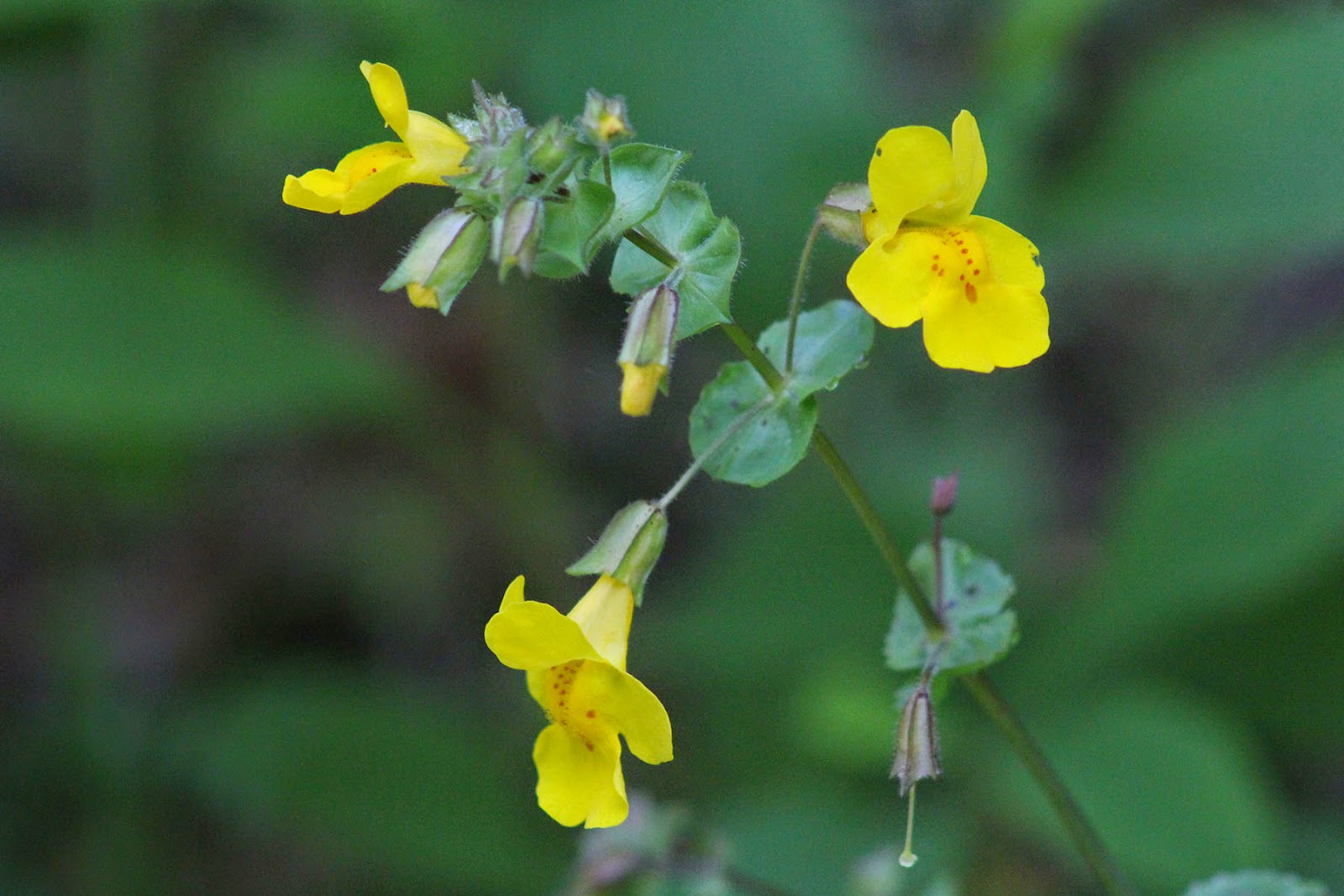 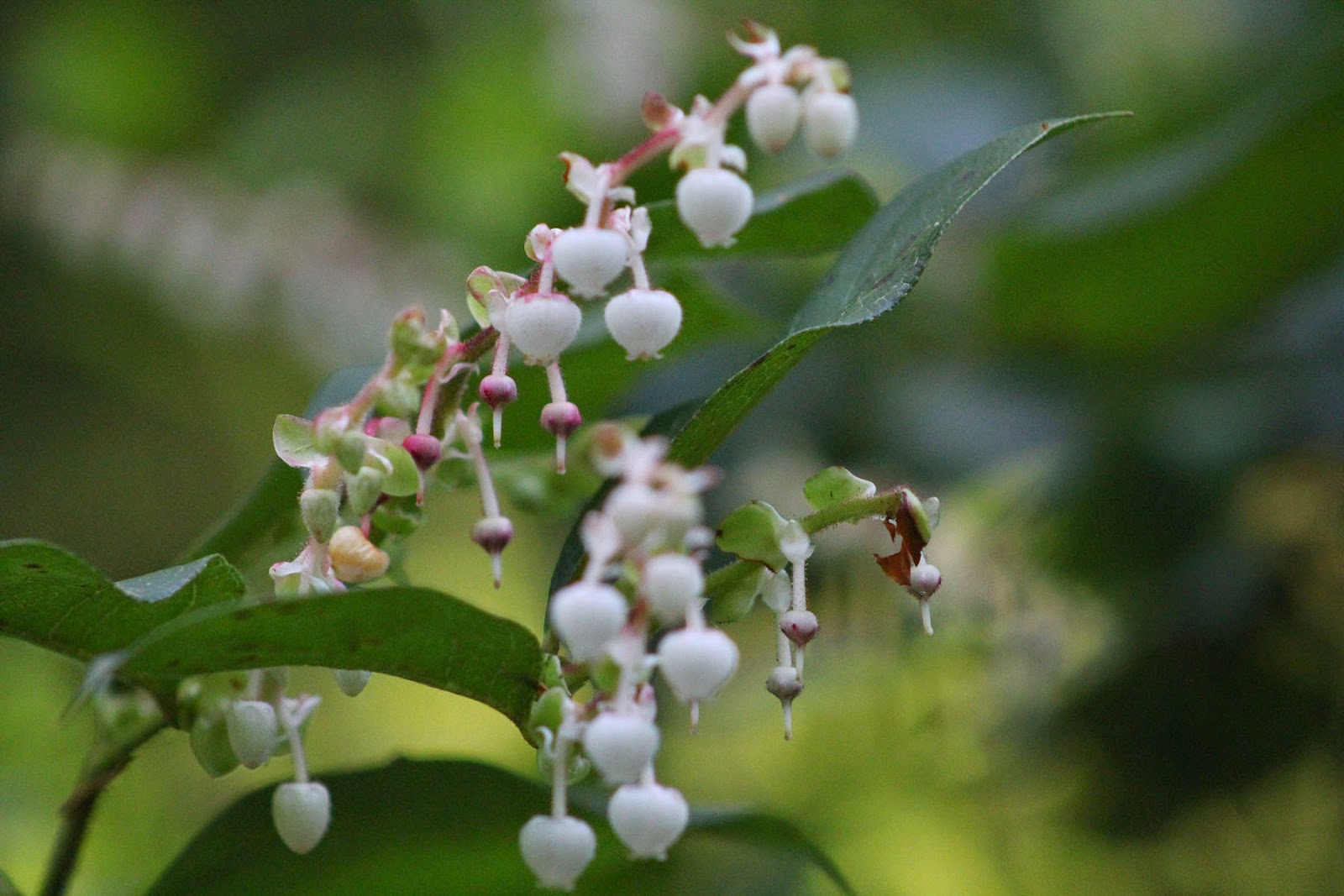 Another group we’re becoming more familiar with are crane flies. Most crane flies look like gigantic mosquitos. I mean HUGE, prehistoric-looking mosquitos. But they’re not mosquitos, and they’re actually quite harmless. This Tiger Crane Fly doesn’t look much like a mosquito at all, but rather more like a robber fly. Notable Leps. we saw on our hike were a worn Echo Azure, and a neat black and white Rheumaptera moth. 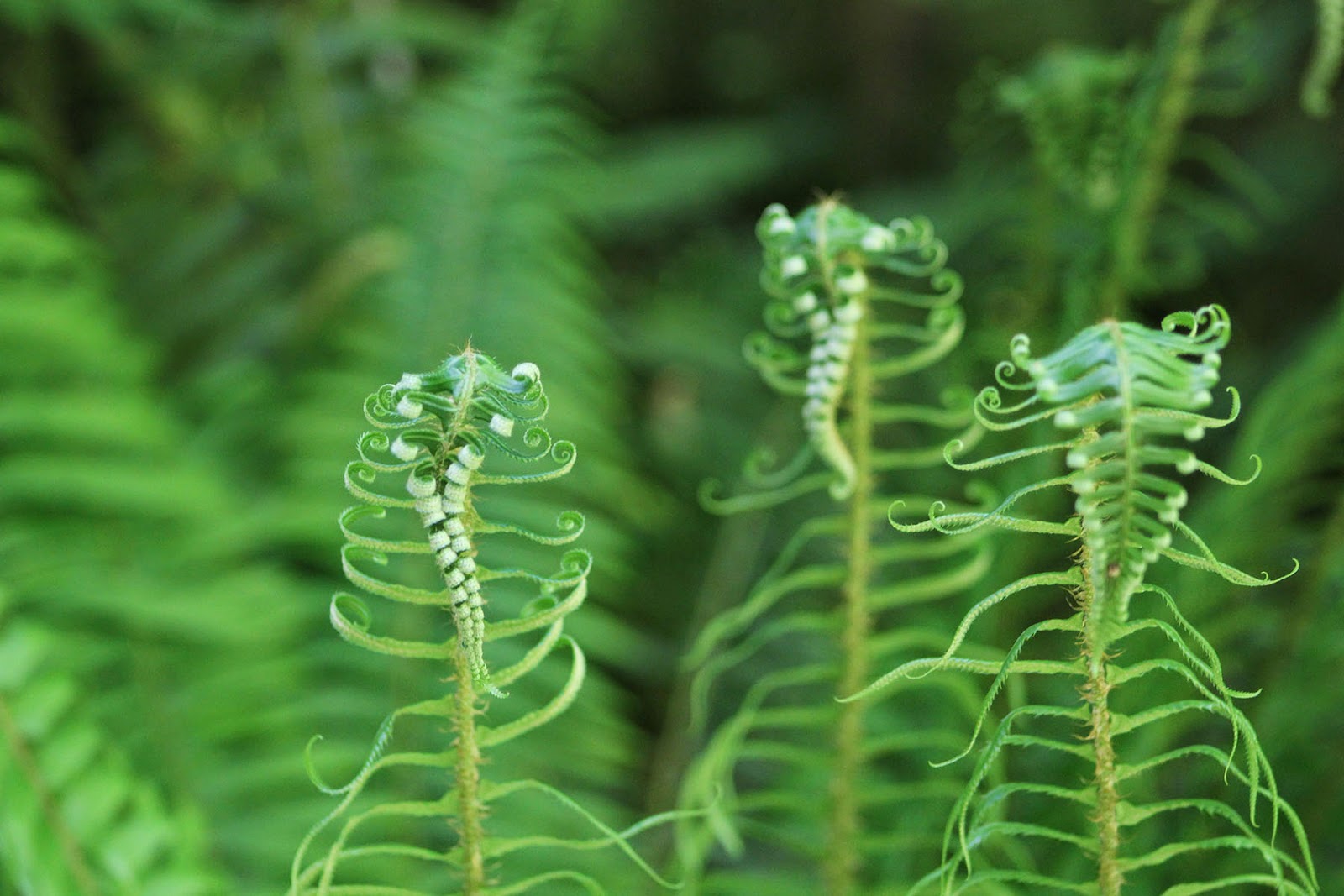 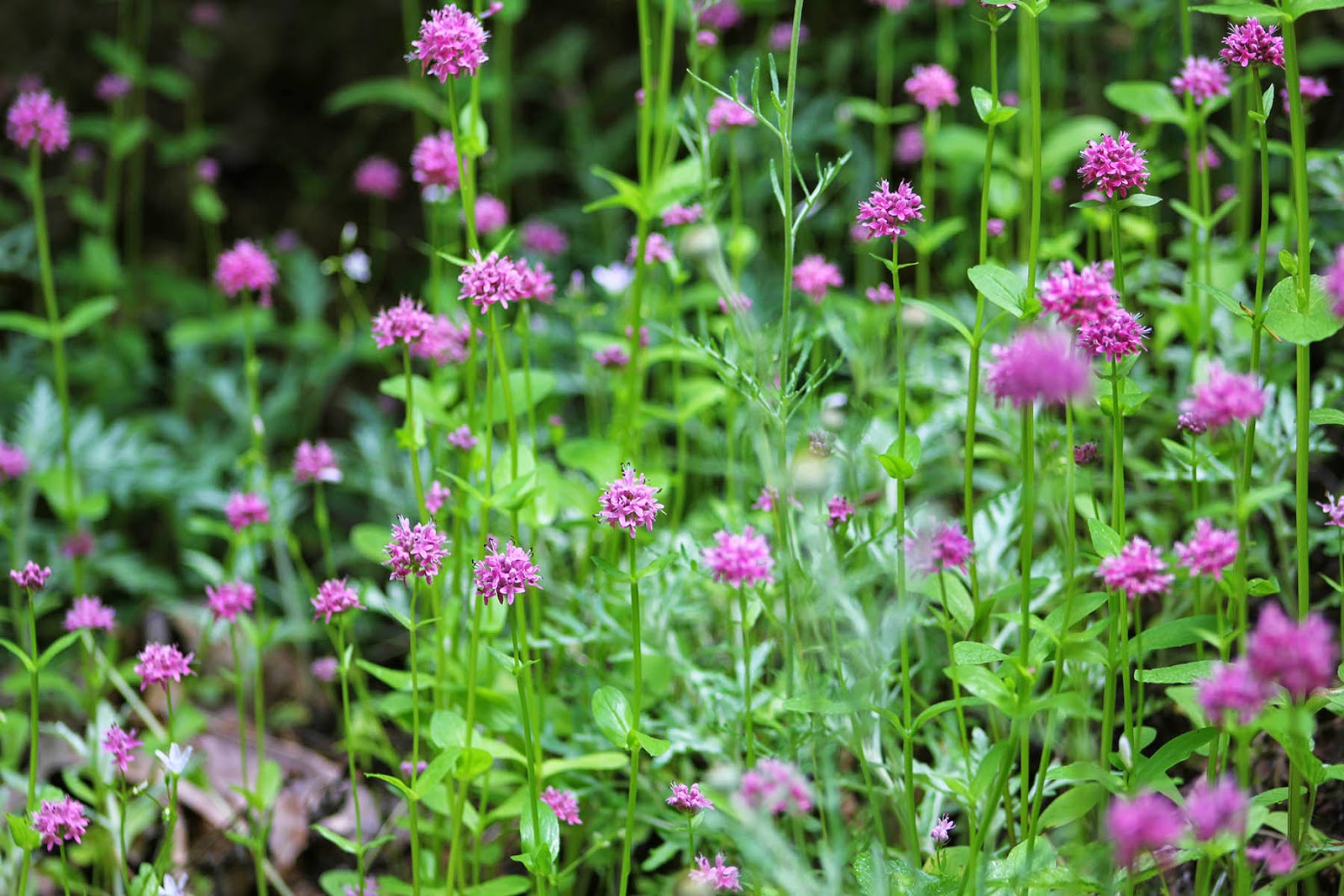 When we eventually did see an American Dipper, we were lucky enough to find two together. One of them was feeding the other, and we’d naturally assumed in the moment that we were watching an adult and a juvenile, but now I’m not so sure: as part of Dippers’ courtship, “the male may feed the female after she begs from a crouched position with quivering wings, following which the male often sings with neck and bill stretched upward” (Knight, 2001, p. 447). I think this is what we witnessed (it was in late May) — it doesn’t look to me like a juvenile, but it’s hard to say with certainty. This is supposed to be followed by a flight chase, but unfortunately a group of rowdy teenagers (does that make me sound old?) went down into the stream to splash around, and scared the Dippers off. 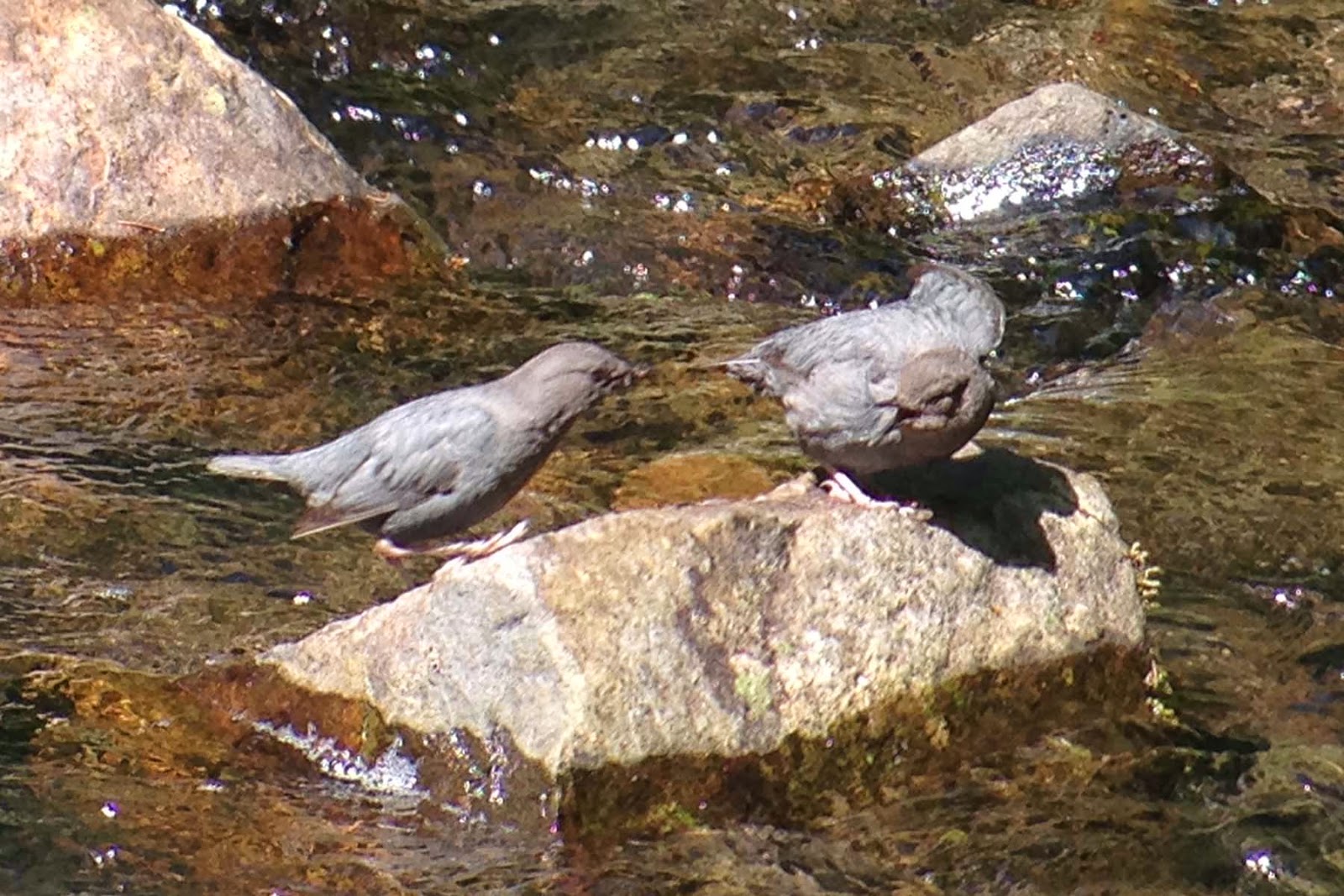 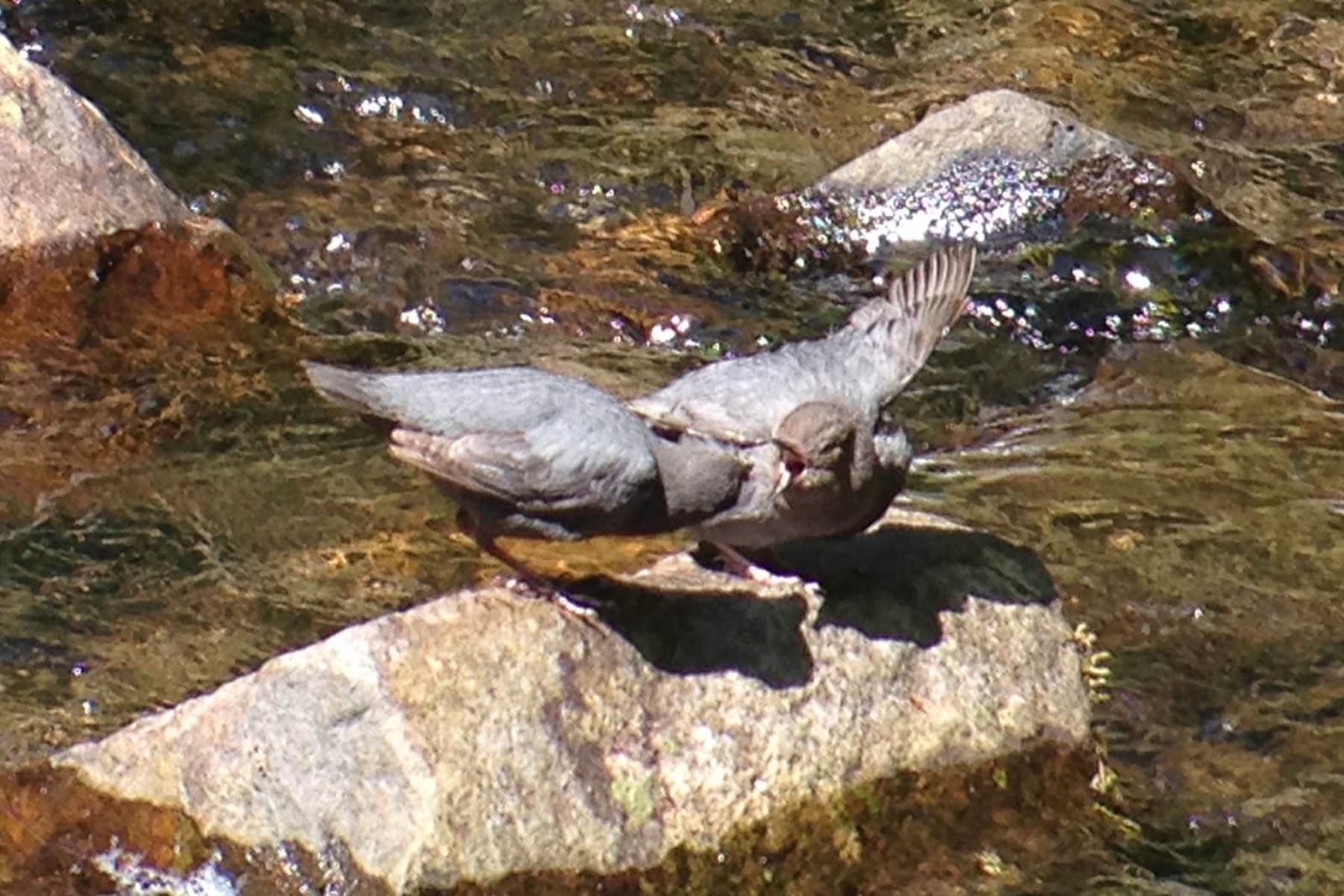 But the Dippers didn’t disappoint my crazy high expectations for them to dazzle and amaze; we were even able to make out those bright white feathered eyelids of theirs from our spot high above them. We encountered a couple more Dippers farther along, but only in flight, and we didn’t manage looks that were nearly as satisfying. By the end of the day the narrow 5-mile trail we were on started to feel like the line for Splash Mountain, with so many thousands of people coming to see the waterfalls. Somebody forgot to tell them that there’s something that makes waterfalls even more spectacular, and that’s American Dippers. 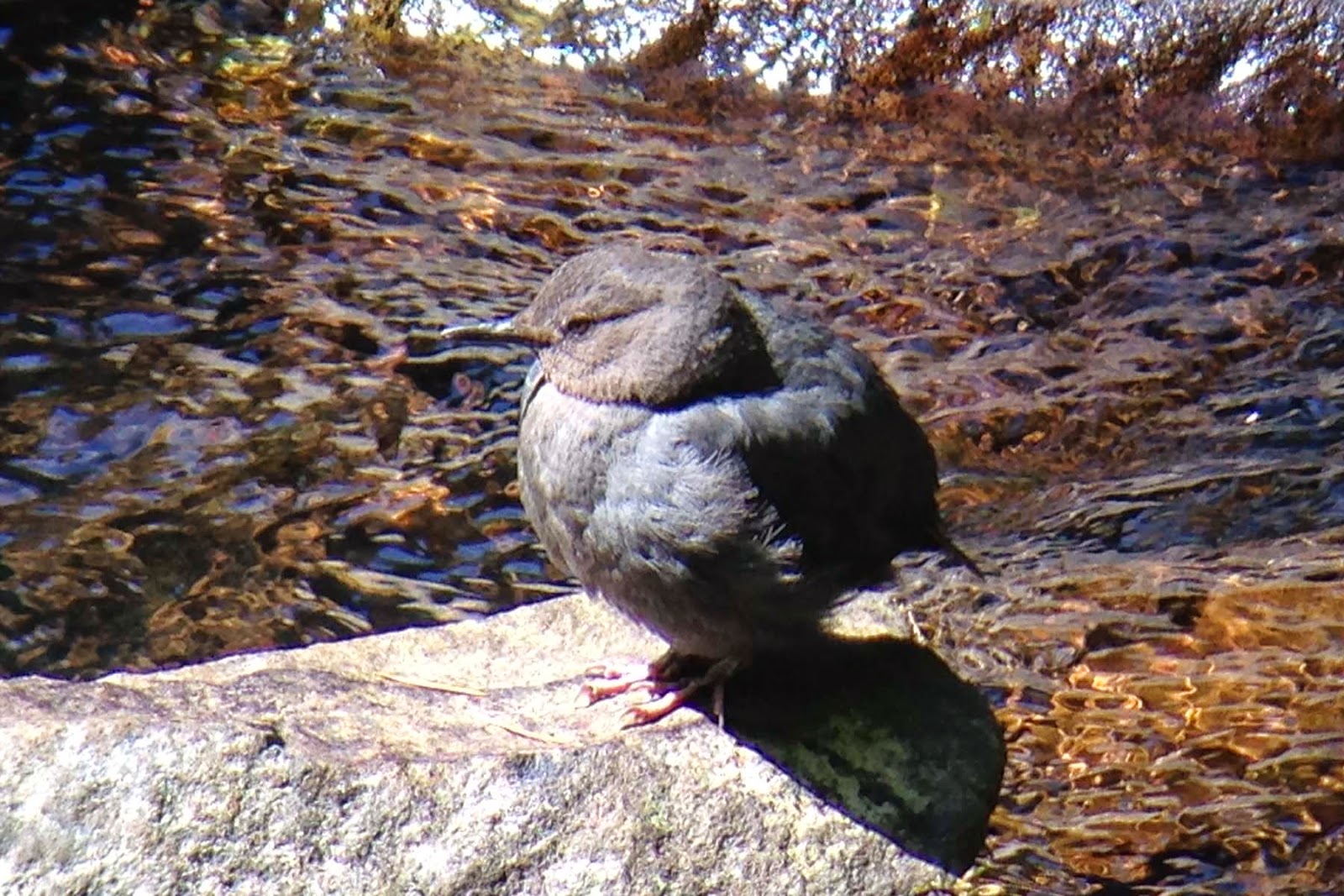 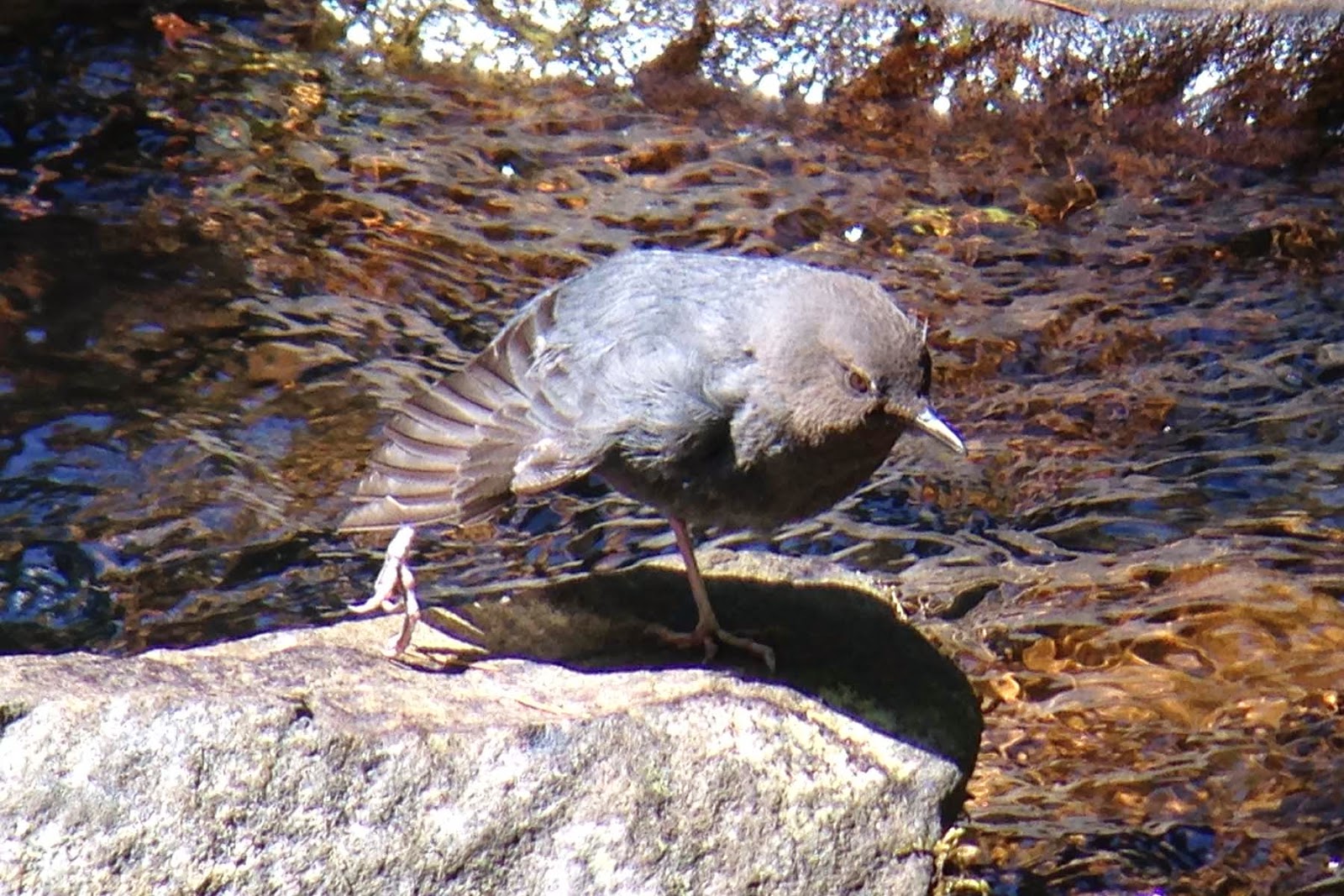 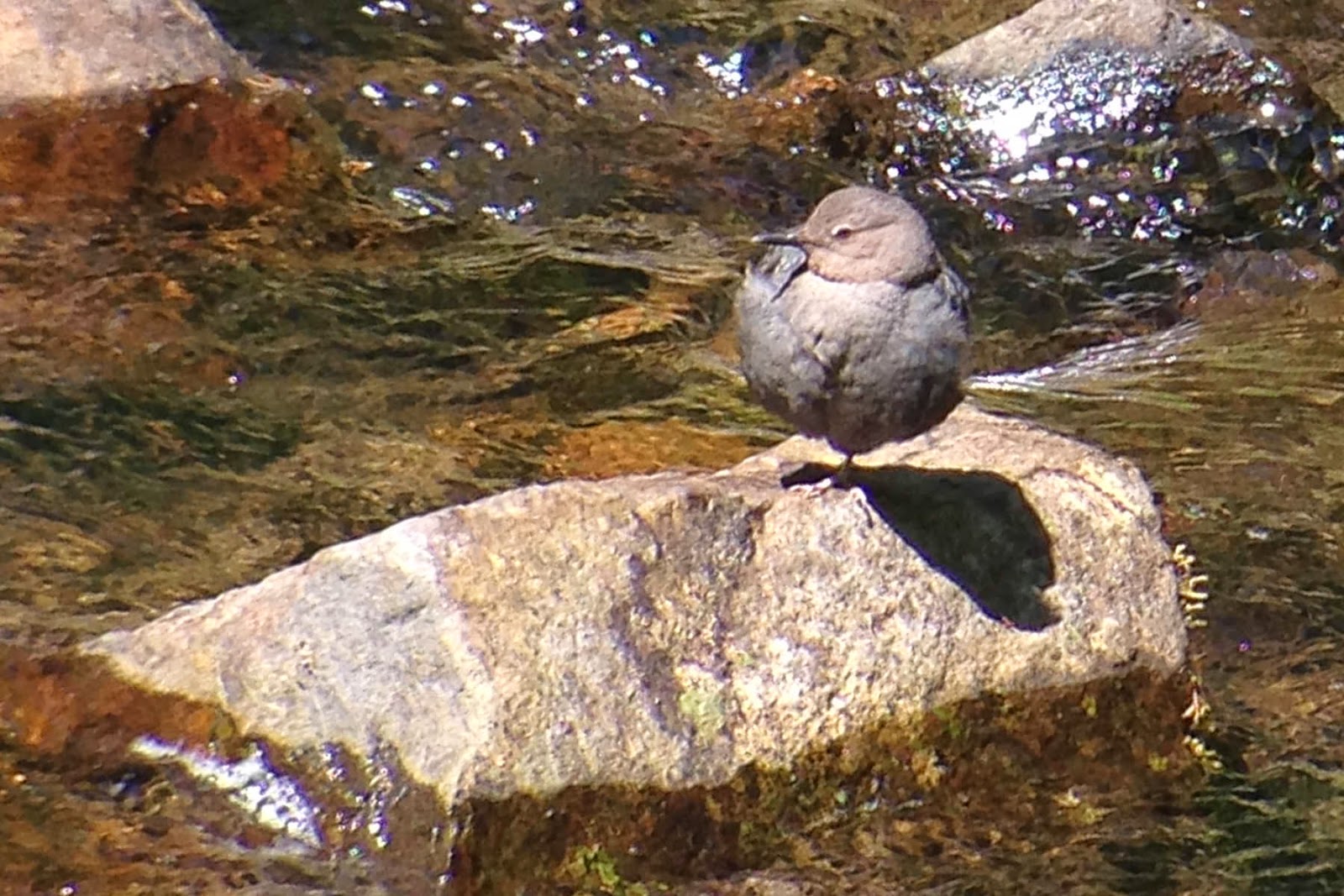 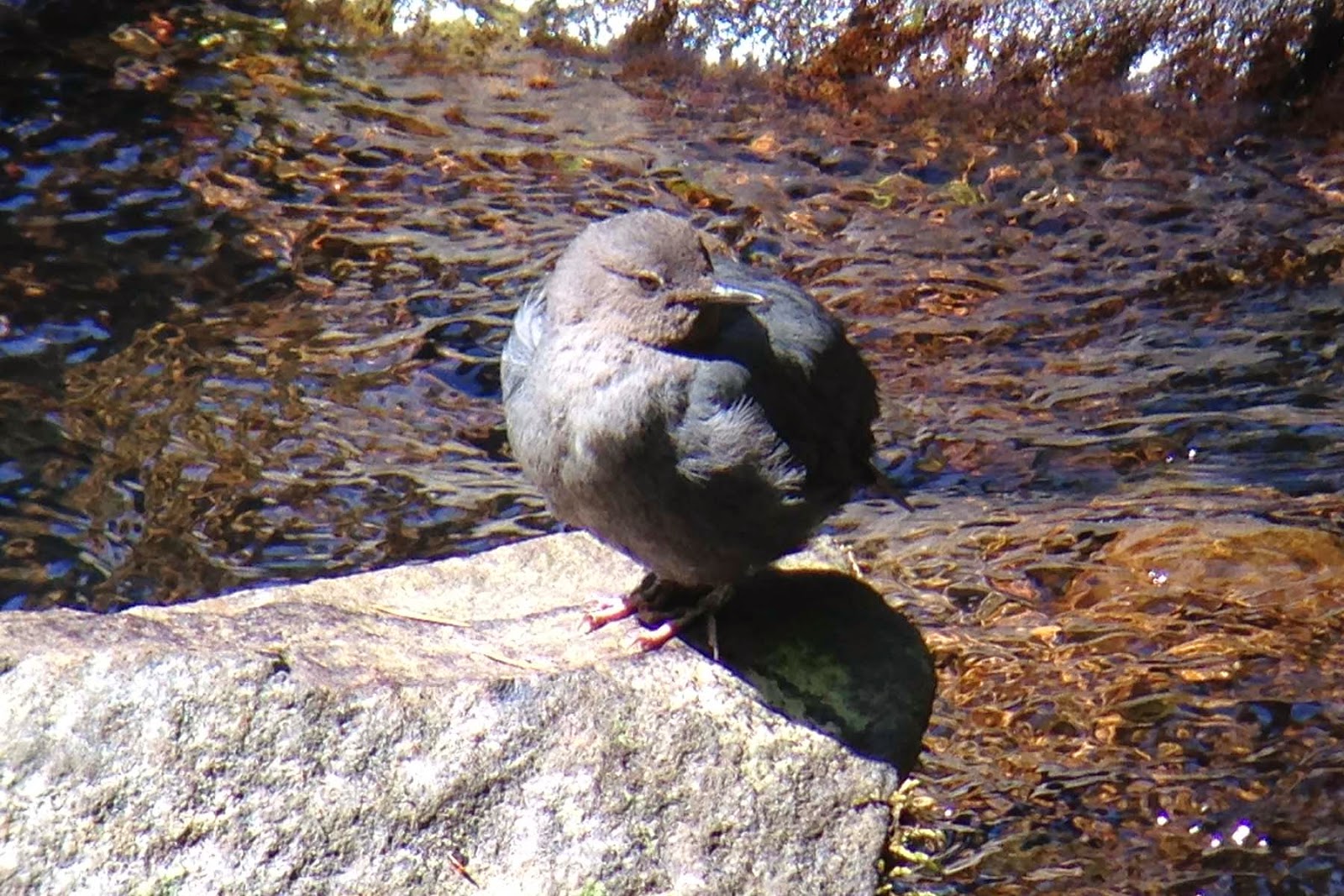 The Sibley Guide to Bird Life and Behavior. Illustrated by David Allen Sibley. Edited by Chris Elphick, John B. Dunning, and D. A. Sibley. 2001 by Chanticleer Press. Essay written by Thomas Knight.
Posted by Nicholas Martens at 3:40 PM