Review: A Message from Martha 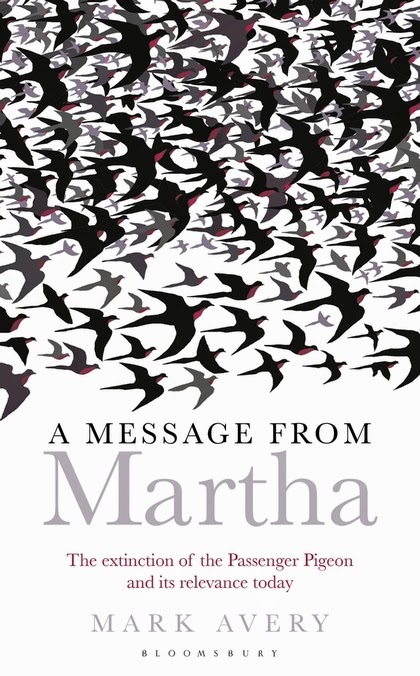 This is indeed the Year of the Passenger Pigeon. To mark the 100th anniversary of the species’ extinction, Bloomsbury Publishing has released two books, each telling the story of how the world’s most numerous bird species vanished from the American landscape. I reviewed the first of these, A Feathered River Across the Sky, by Joel Greenberg, when it came out in January. Although you’ll find many of the same basic facts about Passenger Pigeon biology and ecology in Mark Avery’s, A Message from Martha, this is a very different book, telling a much more personal story, for a (mostly) British audience.

Rather than attempt another near exhaustive collection of first-hand accounts, such as the one Greenberg has already expertly accomplished, Avery very clearly and concisely summarizes both the knowns and unknowns of the Passenger Pigeon’s life history. There are quite a number of puzzles remaining about how the Passenger Pigeon was able to survive in such tremendous numbers, and how its population crashed so dramatically over so short a timespan. Avery, a former conservation director at the RSPB, applies deductive reasoning to arrive at the most likely solutions to each of these problems, in what are some of my favorite sections of this book.

Both Avery and Greenberg provide information about how habitat loss and overexploitation each contributed to the pigeon’s extinction. However, Greenberg tends to draw more attention to hunting and trapping, perhaps because of his strong reliance on first-hand accounts throughout his book. Avery, on the other hand, makes a strong case for why habitat loss may be the larger factor (deserving 85% of the blame, he says). His reasoning is laid out in detail, and leaves little doubt that he’s hit on some powerful arguments.

This example, I think, helps illustrate a key difference in emphasis between the two books. Greenberg wants to transport us back in time, and give us a sense (as much as possible) for what it was like to live among the pigeons. Avery does more to synthesize our knowledge of Passenger Pigeon biology and ecology with that of other species, and places Passenger Pigeons declines within the larger historical context of America’s westward expansion. Each of these emphases can be compelling, which is why the two books complement each other, rather than make the other redundant.

As I mentioned above, A Message from Martha is also largely a personal story. In 2013, Avery travelled from his native England to the U.S. in order to visit many of the sites that represent important milestones for Passenger Pigeons throughout the 19th and early 20th centuries (e.g., places where massive flocks were once seen; where the last big nestings took place; and where Martha, last of the Passenger Pigeons, spent her final years). As he travels from state to state, we read his journal entries as he struggles to feel any connection to the pigeons: “The area where Wilson saw his flock of Passenger Pigeons is a bit uninspiring — or at least it didn’t inspire me” (p. 91). I’m sure the area was mostly uninspiring even in Wilson’s own time, whenever Passenger Pigeons didn’t happen to be flying overhead. Unfortunately, there’s also much too much detail about the hotels where he stayed, the food he ate, and the conversations he overheard; details that add very little to the overall story.

Avery also makes the deliberate decision to refer to Europeans arriving in America as “European invaders.” This doesn’t apply only to the original colonists, but to Europeans arriving as late as the 19th century (and even to native-born U.S. citizens, it seems). The term was used many times throughout the book, and makes for a strange, unnecessary provocation, that I found somewhat alienating. Likewise, the lessons that he draws at the conclusion might have been applied more broadly, as they deal largely with the problem of declining farmland birds in England, and most specifically the Turtle Dove. Avery also heaps a good deal of scorn on the National Farmer’s Union, which represents farmers in England and Wales. Like I said, this is intended for a (mostly) British audience.

However, there is a lot about this book that all readers can appreciate. Mark Avery is an important voice for conservation, and his wonderfully timely celebration of the Passenger Pigeon adds significantly to our understanding of their life history, and ultimately, their extinction. Furthermore, A Message from Martha demonstrates how interconnected all of life is, and helps us appreciate how much we lose every time we let a species disappear. Martha would be proud.
Posted by Nicholas Martens at 7:13 PM