It’s early March and duck season is winding down in the South, but as Maureen shared in her previous post, we’ve had some great looks at members of this group this winter. Several of these happened over our holiday travels, but one of our most exciting duck encounters of the season happened right here in Savannah, which involved seeing all three scoter species all in one place and at the same time.


Scoters are sea ducks, and over the past couple of winters, we’ve been able to make out Black Scoters from the beach at Tybee Island. Usually when we spot them offshore, the waters are choppy, the birds are far away, and the females are barely identifiable to species. The males are hard to miss, though, with their jet black plumage, and the bright yellow knob at the base of their bill. Even so, these sightings haven’t been as satisfying as we would have liked, and we’d long hoped for the opportunity to see them under better circumstances. 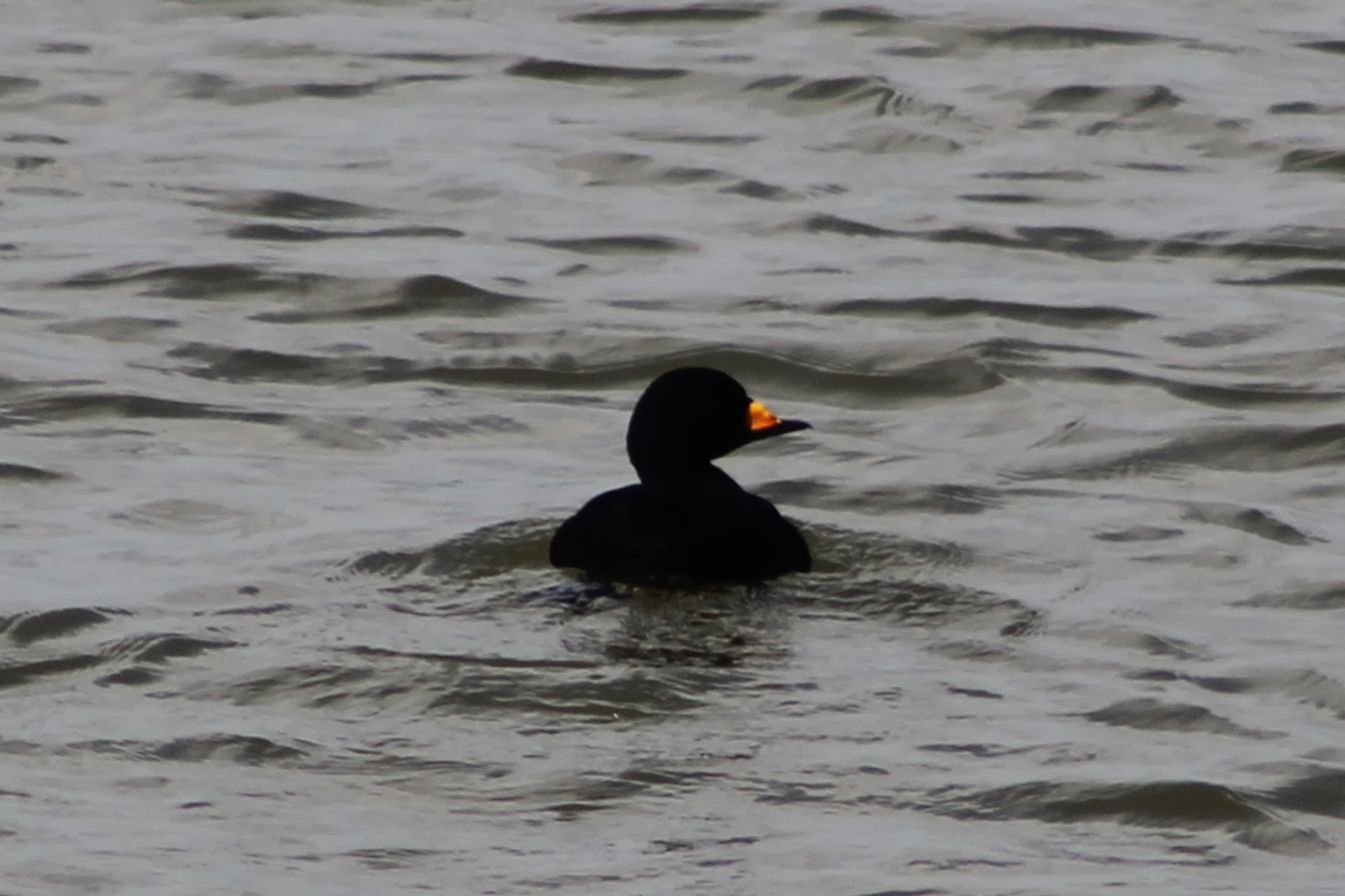 For the past couple of months those circumstances have converged on the Savannah River, along the south end of the Ft. Pulaski National Monument. Reports of White-winged Scoters and Surf Scoters, along with Long-tailed Ducks started turning up in my eBird needs alert emails pretty regularly. When we went to check it out, we were treated to well over 1,000 Black Scoters! There were also a considerable number of Greater and Lesser Scaup, dozens of Redheads, and several other species mixed in in smaller numbers. Included in these were a handful of Surf Scoters and White-winged Scoters, lifting our personal lists to new milestone: Our 300th ABA bird!

The light was fading fast when we came upon this feathered flotilla. We would come several more times in the next weeks, trying to locate a Long-tailed Duck (as many as three had been reported). However, we soon learned that birders weren’t the only ones turning out for the ducks. One day we trekked the half-mile from the parking lot toward the island where the ducks had been congregating, and prematurely started congratulating ourselves on the nice group of Canvasbacks mixed in with Redheads, Buffheads, and Scaup. Unfortunately, we’d been fooled by several long lines of decoys set up by a camouflaged group of hunters who had set themselves up on the island. 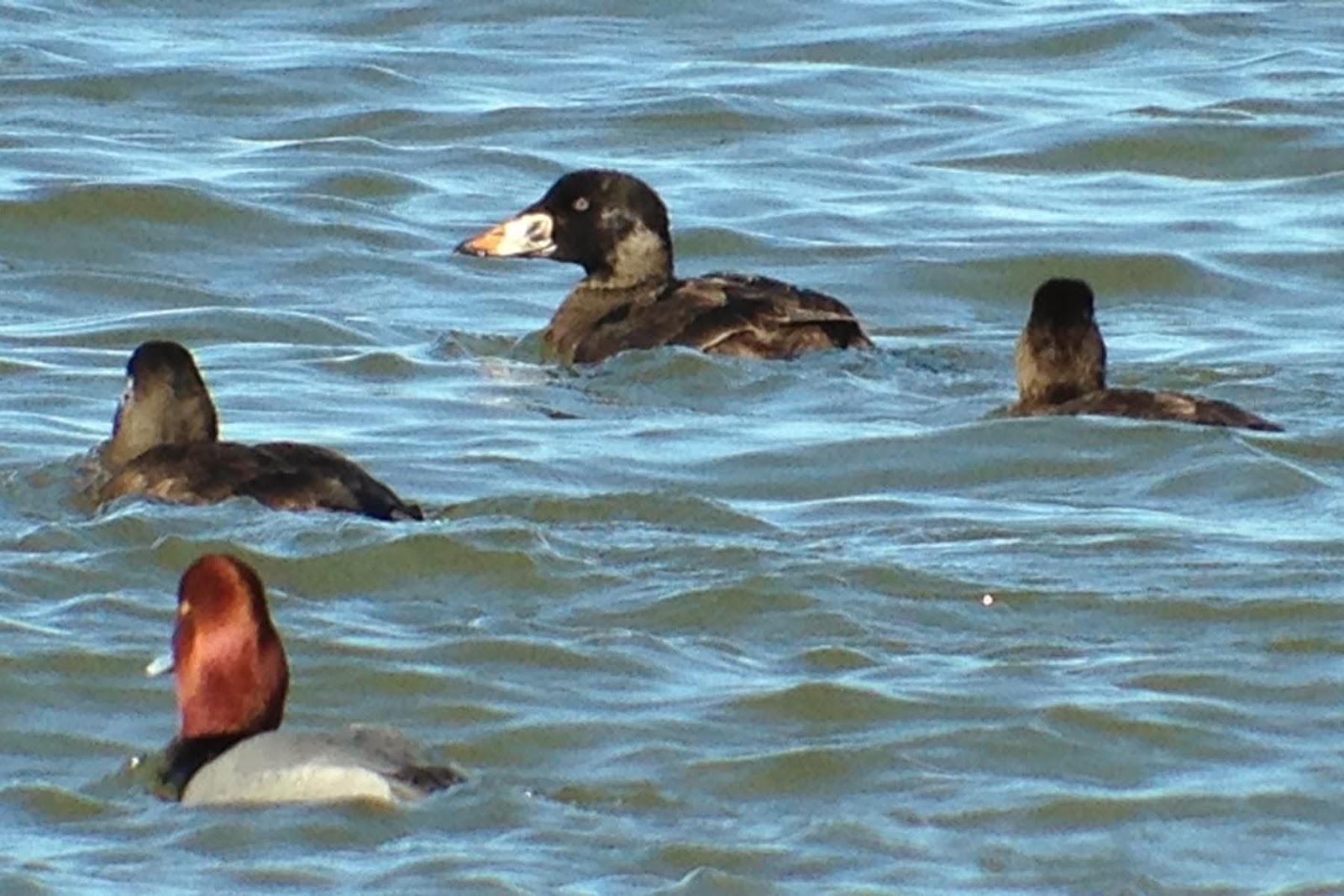 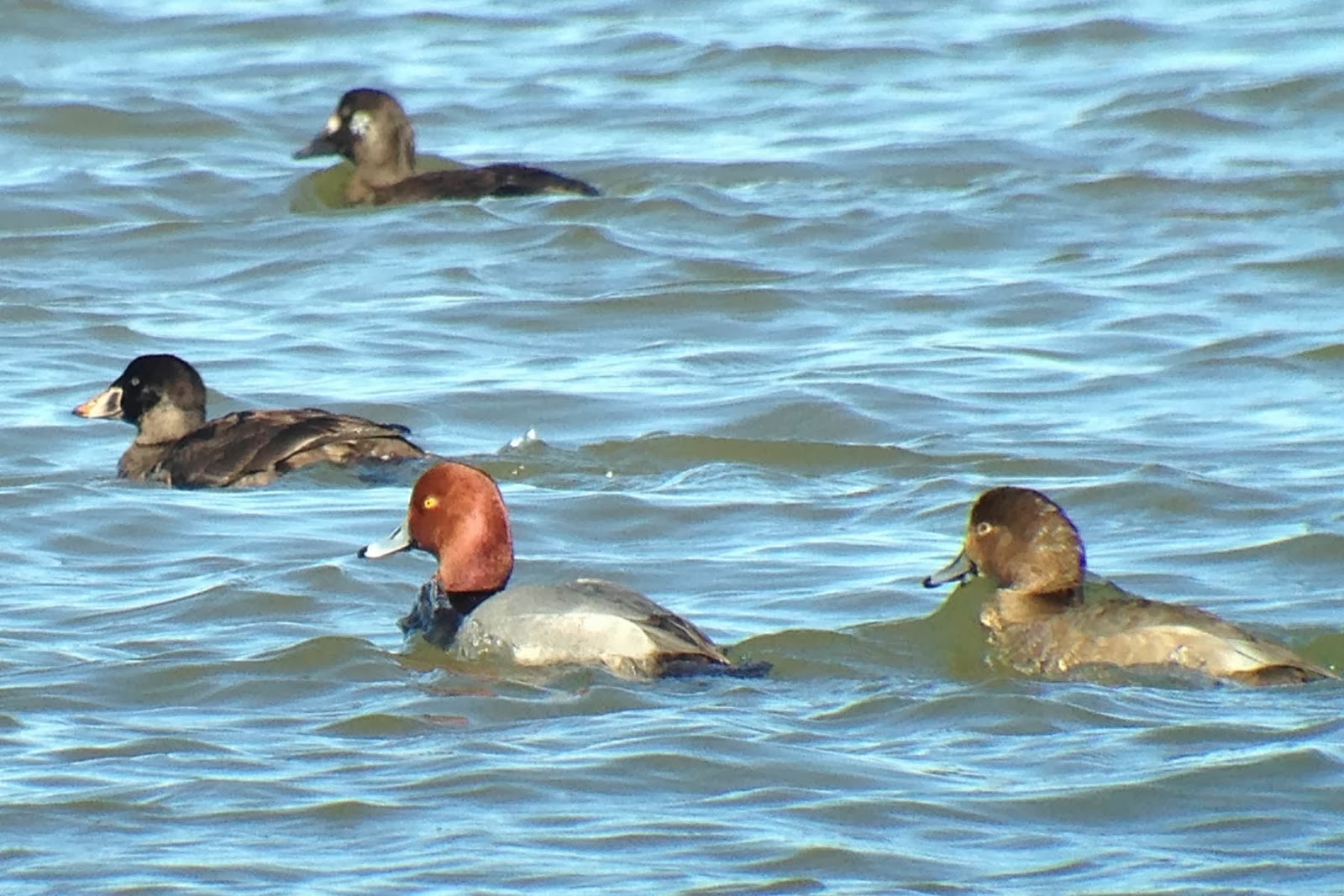 We never did turn up a Long-tailed Duck, but all three scoter species persisted throughout the season, sometimes giving pretty stunning looks. White-winged Scoters, in particular, are a fairly uncommon occurrence down here, and yet we were seeing sometimes as many as a dozen in a single outing. Apparently, they’ve come farther south this year to escape the iced over Great Lakes, and there seems to have been plenty of food for them here, as they’d dive to the bottom of the river and resurface some time later with a bill full of mussels. It’s been great to have the opportunity of studying this odd-looking group of ducks so closely, completing for us the scoter trifecta, and helping put us over a birding milestone.

Posted by Nicholas Martens at 7:12 PM